Is A Yorkshire Village Home to the First Plague of English Vampires?

Today news broke of a number of mutilated corpses uncovered in a Yorkshire village called Wharram Percy. The medieval English villagers showed widespread belief in the undead returning as revenants or reanimated corpses. They fought back against the risk of vampire attacks in an episode that would not be out of place in Dom Augustine Calmet’s Treatise on Vampires and Revenants in Eastern Europe in the early eighteenth century or in a scene from The Walking Dead.  This news story is of particular interest to me. Firstly, I have often questioned how old are vampires really in previous posts and have given it some serious thought and secondly, whilst England was responsible for the first fictional Romantic vampire thanks to Byron and Polidori, accounts of historical vampirism in England are very, very rare.  The case of the Southwell Nottingham Vampire   is known to me and I have been fascinated by the Renwick Bat and the Croglin Vampire for many years because of my childhood roots in Cumbria (the creature was recently written about briefly by Geoff Holder) 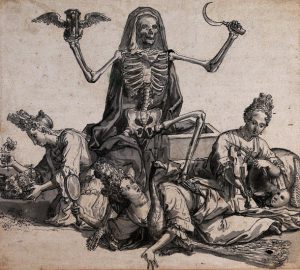 Deviant burials and the sustained mutilation of the dead in certain villages in Bulgaria  now point to a much earlier belief in vampirism and revenants in Europe than had previously been known.  Today The Independent claims that archaeologists and ‘scientists’ have now found the medieval remains of the first English vampires in Yorkshire’s Wharram Percy whilst The Daily Mail suggests a medieval belief in an English zombie apocalypse.  The Guardian is characteristically on the fence as to whether these are zombies or vampires preferring to use more general terms for the undead but they have given weight to the story that medieval villagers were mutilating the dead to stop them rising again. For my own part belief in vampirism sounds a likely cause of the Yorkshire villager’s crusade against devilry. Yorkshire is of course also home to the Hull Werewolf, a favourite of OGOM.