The body of a five hundred year old ‘vampire’ will go on display in an ancient cemetery in the town of Kamien Pomorski this month. The vampire corpse was discovered two years ago in Northern Poland and is currently being debated again in the British Press. Archaeologists have confirmed that it has a stake through its leg (presumably to prevent it from leaving its coffin) and a rock in its mouth (to stop any unfinished blood sucking). 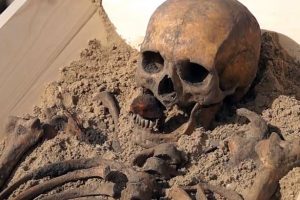 The discovery of this vampire corpse interests me on a number of accounts. One of the first questions I ask my ‘Reading the Vampire’  MA students when embarking on our journey into literary vampirism is how old are vampires really? Do they have a country of origin? When was the first literary vampire? When did the word ‘vampire’ first enter the English language? Also how does one become a vampire according to early folk belief?

In the earliest accounts vampires are revenants or returners, often taking the form of a diseased family member who reappears in the unfortunate guise of a vampire. ‘Unfinished business’, even something so trivial as the want of clothing or shoes, is enough to make the dead return to the world of the living. Agnes Murgoci (1926) argues that the journey from death to the afterlife is a perilous one and there is a belief in Romania that it takes forty days for the soul of the deceased to enter paradise. In some cases it may even linger for years, the thought of which creates great anxiety within families and during this time there are a myriad of ways that deceased family members can succumb to vampirism. A number of which are listed by Petrovici in his study of the Romanian folkloric vampire (1982).  Dying unmarried, dying unforgiven by one’s parents, dying a suicide, a murder victim, having a breeze blow across a corpse before burial, having a dog or cat walk under or over a corpse before burial, leaving a mirror facing into a room, not turned to the wall at this precarious time, or even simply being a bad person. Any of these factors can lead to a person returning as a vampire.

The precautions taken in the recently discovered vampire burial in Poland do cohere with practices that I know about, such as piercing the corpse, nailing down the tongue, putting a needle in the heart and placing small stones and incense in the mouth and under the finger nails to stop blood sucking and clawing. This vampire corpse dates back to the 1500s and it might go some way towards answering the question how old are vampires really? I have always wondered if vampires are ‘as old as the world’, as Frayling has claimed or whether they are born in the eighteenth century when the first European accounts by Dom Augustine Calmet and Joseph Pitton de Tournefort appear. Calmet’s Treatise on the Vampires of Hungary and Surrounding regions was published in French in 1746 and in London in 1759, eventually appearing as The Phantom World in 1850. Tournefort’s Voyage to Levant  dates back to 1702. This text always excites my imagination as it combines my three research strands, botany, vampirism and eighteenth-century literature in ways I had never imagined (apart from maybe in the work of Rousseau).  In Myconos a botanising man of science comes face to face with a plague of bloodsucking vampires. Greece, and Hungary feature prominently in early accounts and this is mirrored in Romantic literature when Byron makes Greece the setting of his unfinished vampire story A Fragment published in 1819.

The British Vampirologist Montague Summers (1880-1948) referred to vampires as ‘citizens on the world’, a phrase taken from Goldsmith. They exist for him outside of temporal or geographical boundaries, but many recent accounts such as Erik Butler’s (2010), contradict this, locating the vampire in Eastern Europe in the eighteenth century. We do know that 1732 was the vampire’s annus mirabilis. There were twelve books and four dissertations on the subject published over that year, as well as the term’s enshrinement in the English language (though this date again is disputed).  Fifteen years after Tournefort the London Journal reported some enquiries into ‘vampires’ at Madreyga in Hungary (a story later referred to by John Polidori) and thus was recorded the first use of the word in English (according to Roger Luckhurst). The earliest known reference to ‘vampyres’ in English prior to this was thought to be in Travels of Three English Gentleman in 1734 (rpr. 1745) [OED claim]. It is worth noting that Tournefort uses ‘vroucolacas’ (re-animated corpse) but the term ‘vampire’ does appear in English translations of Calmet.  The number of different words for ‘vampire’ can be frustrating for scholars but it provides rich source material for writers. Here are just a few of them:

The history of the vampire is a disputed and uncertain one but the recently authenticated vampire corpse in Poland provides evidence for vampire beliefs and burials as early as the sixteenth century. In providing the links to real life practices of deviant burials archaeology is making a vital contribution to the future of gothic studies. There is little appeal or attraction for these early revenant figures and unlike the English aristocratic vampire (Frayling’s ‘Satanic Lord’) early folkloric vampires are peasants and tend to appear en mass like modern day zombies. Paul Barber describes the folkloric European vampire as

A plump Slavic fellow with long fingernails and a stubbly beard, his mouth and left eye open, his face ruddy and swollen. He would wear informal attire – a linen shroud – and would look for all the world like a dishevelled peasant (Vampires, Burials and Death, 1988)

At this moment in history the troubling sexuality of the nineteenth-century vampire is as yet unexplored.  The story of how the seductive Romantic Byronic vampire comes to leave his calling card in polite society in London in the nineteenth century is beyond intriguing and I just can’t wait to get started on the history of the literary vampire with my new students. If you are beginning the course in the autumn do comment or add any thoughts.

If you’d like to know how vampires transition from dishevelled peasants into alluring aristocrats and how they are then reborn as today’s beautiful undead why not study vampires as part of your MA? There is still time to apply for the MA Modern Literary Cultures online at www.go.herts.ac.uk/maliterature. You can register your interest via the MA Programme Leader Dr Anna Tripp at a.f.tripp@herts.ac.uk. You need to do this by the end of July or beginning of August at the latest and remember don’t leave home without your garlic!