Open Graves, Open Minds: Representations of Vampires and the Undead from the Enlightenment to the Present Day

* Available in paperback from June 2016

Details on MUP’s site here and also available from Amazon 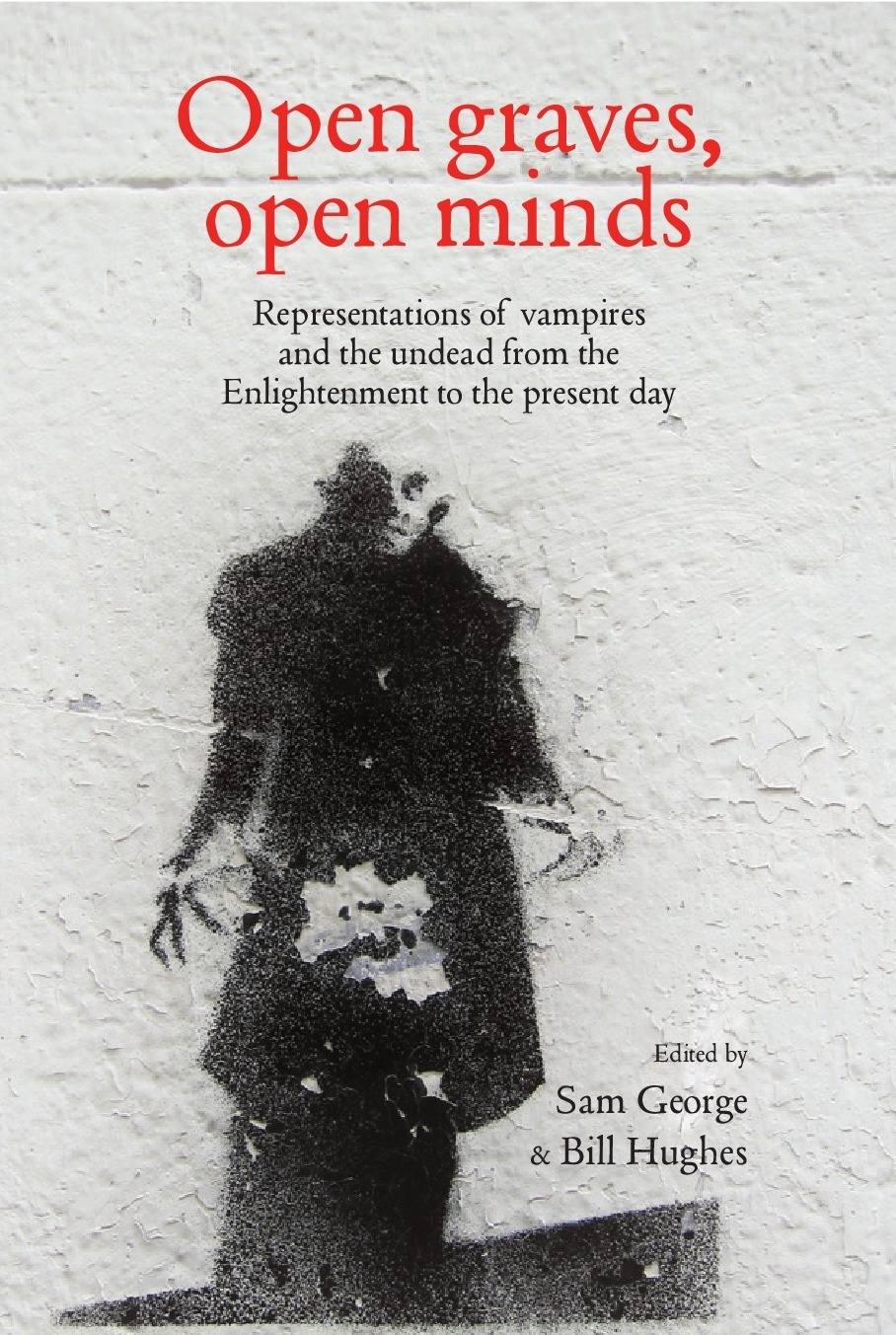 This collection of essays relates the undead in literature, art, and other media to questions concerning gender, technology, consumption, and social change. It covers the Enlightenment investigation of vampires by Dom Augustin Calmet-the source of many later vampire narratives-through Romantic incarnations in Byron and Polidori to the classic tales of Le Fanu’s Carmilla and Stoker’s Dracula. Further essays discuss the vampire in the context of fin-de-siècle decadence and Oscar Wilde before an examination of the cinematic treatments up to Coppola’s Dracula, where the sympathetic vampire appears for the first time. More recent manifestations in novels, TV, young adult fiction (including, of course, Twilight), cinema, and the Internet are dealt with in chapters on True Blood, The Vampire Diaries, Marcus Sedgwick, and the undead in technology.

Vampires have universal appeal and the number of titles already in existence demonstrates the breadth and depth of interest in the subject from a variety of related fields (e.g. film, literature, anthropology, folklore, creative writing). The Open Graves, Open Minds book makes a refreshing contribution to this market. It gives vampires an academic platform, serving as an innovative course reader for students of both literature and film. The publication covers more recent material than any of its competitors, bringing debates around the literary vampire into the twenty-first century where vampires are currently enjoying a vogue.

The book already has a large following and the research is high profile. The more established contributors give the volume academic weight and draw on different, yet related disciplines: Catherine Spooner (Contemporary Gothic and fashion), Marcus Sedgwick (writer for young adults), Stacey Abbott (film specialist). The volume also showcases the work of newer up and coming scholars, achieving a pleasing blend of pertinent interdisciplinary research.

The publication has developed out of a successful international conference and there are further opportunities for promotion in 2012. The ‘Open Graves, Open Minds’ project continues to attract attention worldwide. When the conference was reported in The Guardian, the story was taken up by Reuters and soon went global, featuring in newspapers from the Sydney Morning Herald and the Irish Times, and other media such as the Huffington Post. Over 30 media stories generated by the project are available via Sam’s Academia.edu page.

The book supports the MA module, ‘Reading the Vampire: Science, Sexuality and Alterity in Modern Culture’, at the University of Hertfordshire. The course has attracted interest from students and media around the world and is fast becoming an urban myth (see links to media stories on the above website here). Sam was interviewed by Simon Midgley on bringing vampires into the curriculum; see ‘Counting on Dracula‘, The Times, 16th March 2011. This again suggests the book and project have enormous appeal.

The publication itself is tightly focussed and fills a gap in vampire/undead studies. It revisits the canon whilst introducing readers to recent scholarship on the new genre of paranormal or dark romance. It is innovative in bringing vampire studies bang up to date, carving a niche for itself and leaving behind its competitors, which are seminal but belong to the 1980s and 90s.

The editors have conceived of a book with broad appeal, one that will be of great interest to literary scholars concerned with the Gothic, modern and contemporary literature; academics involved in TV and film studies, and cultural studies and undergraduate and postgraduate students. The editors have carefully planned the book with the interested lay person or general reader in mind too—the many readers of paranormal romance and vampire fiction, for example.

The book is also aimed at students of creative writing and followers of vampire fiction and related genres. The publication includes an essay by the established writer, Marcus Sedgwick, who will allow the readers access to his notebooks, exploring his creative processes and documenting his to journey to Transylvania. The book is also designed with the University of Hertfordshire, ‘Reading the Vampire’ MA students in mind and those on similar courses. Those following the publication via the media coverage of the ‘Open Graves, Open Minds’ project are also catered for.

The Open Graves, Open Minds book covers more recent material than any of its competitors. The book is structured with overlapping themes, giving it a certain continuity. This is partially due to its serving as a critical reader for the MA module at Hertfordshire (and other similar courses). The analyses are largely from a literary-critical perspective, treating the vampire as metaphor, rather than, say, a sociological approach (though attention to social and historical context features strongly). Many of the above concentrate on film and TV, whereas this book—though not ignoring other media—focuses more on the novel and other literary genres. However, the sheer quantity of these books demonstrates the interest there is in the subject, and our book makes a refreshing contribution to this field.

These books do not have the high profile of this study, developing as it does from a highly successful conference and larger project. Interest here has already gone global and generated a number of media stories. There are over 400 people already following the book on Academia.edu!

The primary readership is an interdisciplinary academic one, involving both students and academics in film, literature, Gothic and genre studies, creative writing and critical theory. Buyers will also include those who attend the Stoker centenary events and the Master’s students at Hertfordshire and other universities whose course the book supports.

The book will also appeal to the general reader, informed lay person, or enthusiast of vampire or Gothic fiction and paranormal/dark romance. This audience will extend to include creative writers, filmgoers with an understanding of the genre and those with an interest in recent trends in young adult fiction.
List of Contents