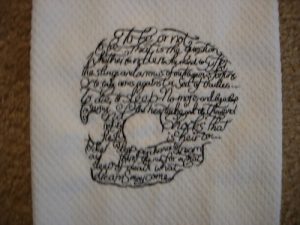 The nation is celebrating Shakespeare this weekend and it is time to enter the gothspeare and rediscover some of our blog entries on gothic Shakespeare see for example:

Black and Deep Desires: Was the Dark Lady of Shakespeare’s Sonnets a Vampire?

OGOM’s very own Kaja Franck doubles as a guide at The Globe Theatre (I have heard she is excellent too) and it seems a good time to mention a book that is able to make connections between readings of Shakespeare and the rise of the Gothic. It is a little gem of a publication entitled Gothic Shakespeares edited by John Drakakis and Dale Townsend.  It is not a new book but one I find myself returning to again and again. Shakespeare is of course full of ghosts, witches (even wolves/werewolves) together with fear-inducing moments and cultural anxieties which many writers in the Gothic mode have since emulated, adapted and appropriated. My favourite essay is “As one dead’: Romeo and Juliet in the Twilight Zone’ by Glennis Byron which sets the scene perfectly for intertextual readings of paranormal romance. Shakespeare’s teenage lovers are referenced in many YA gothics such as Marion’s Warm Bodies where zombie R even re-enacts the balcony scene with his living girlfriend Julie. Other stand out essays in this volume include Dale Townsend on Hamlet’s ghost, Angela Wright on Radcliffe and Shakespeare, Sue Chaplin on Shakespeare and Walpole’s gothic, Peter Hutching on ‘Theatres of Blood’ Shakespeare and the horror film and Fred Botting and Scott Wilson on the ‘gothspeare’. This little book offers a provocative account of Gothic reformulations of Shakespeare, and Shakespeare’s significance to the Gothic. Once you are awakened to the gothspeare you will never ever think of the bard in the same way again!!