Why Are Witches So Popular? 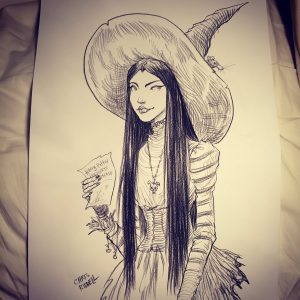 The Guardian Newspaper has just featured an article entitled Coven Ready: from Instagram to TV:Why are Witches so Popular? It appears that there is a spate of new occult dramas about witches. A Discovery of Witches, an adaptation of Deborah Harkness’s novel about a young witch who finds an ancient manuscript that brings her to the attention of vampires and demons,  began on Sky One last week. Other upcoming witchy dramas, include Netflix’s Chilling Adventures of Sabrina, and CBS All Access’s Strange Angel. Serendipity has also dictated that Spellbound, an exhibition featuring witchcraft, opened last month at Oxford’s Ashmolean museum. Among the exhibits is The Discovery of Witches, a 1647 work by the notorious Witchfinder General Matthew Hopkins, which inspired the title of Harkness’s novel. If you are researching witches yourself it’s a very sexy topic just now.

OGOM has always celebrated the figure of the witch. Witches feature heavily in our Gothic Hertfordshire Tour described here in relation to our celebration of The Urban Weird.  There you will encounter Mother Haggy, who crossed the River Ver in eggshells and a kettle drum, Rosina Massey, who was seen conducting her cups and saucers in a dance around the table, and sending her 3 legged stool on errands, together with Sally Deards, the Witch of Rabley Heath. Most terrifying of all is the story of Ruth Osbourne, the Gubblecote Witch. Ruth was swum for a witch in 1751, even though the death penalty for witches had seemingly been abolished in 1735. St Albans, which houses the OGOM headquarters, was also home to Gerald Gardner, the founder of contemporary modern day witchcraft, later termed ‘Wicca’. There are some useful resources on witches on the blog including 100 Must Read Books About Witches and a review of Witches, Magic and Demons at the John Rylands. My early engagement with stories of witches is laid bare in How Did I Choose Me My Witchcraft Kin: My Past and Future in Witches.

1 Response to Why Are Witches So Popular?