Why May is the Month of the Wolf 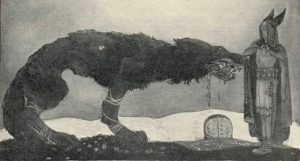 May is turning out to be the month of the wolf. Last week saw the news of the first Danish wolf pack in 200 years  and Kaja has reported that revellers at May Day celebrations in the UK witnessed the appearance of the folkloric wolf at the Jack-in–the-Green Festival in Hastings. There was no shortage of wolves following Walpurgis nacht as it triggered some interesting articles on religion and sorcery which inevitably involved some werewolves. For example, Dr Karl E. Siegfried posted on the story of Tyr’s binding of the wolf Fenrir on his longstanding Norse mythology blog. (well worth a visit) He argued that

The story of Tyr’s binding of the wolf Fenrir is the only surviving myth of a god who must have once been a major figure in Germanic religion. Today, there are two popular readings of the role of the wolf that place twenty-first century identity politics over a deep understanding of the mythic figure itself. After examining the myth and the variant interpretations, maybe we can agree on a reading that is both historical and contemporary.

Ian Simmons also wrote about Werewolves and  their appearance in Medieval Jewish thought for the Fortean Times. Thanks to Tamsin Rosewall for sending this article to OGOM (unfortunately there is not an online link) but you can view a scan via Twitter here  https://twitter.com/autumnrosewell/status/858297956012838912

These May wolves are hugely significant as this month also marks the build up to our bid for a Being Human Festival event on humankind’s relationship to the wolf (we hope to make an announce here soon). 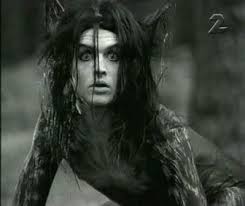 Associate Professor of Research, School of Humanities, University of Hertfordshire Co-convenor OGOM Project
View all posts by Sam George →
This entry was posted in Generation Dead: YA Fiction and the Gothic news, OGOM News, OGOM: The Company of Wolves and tagged Being Human Festival 2017, Werewolves, Wolves. Bookmark the permalink.