Following on from Sam’s post about folk horror and its recent revival, I thought I would write about my attendance of the Jack-in-the-Green festival in Hastings. This takes place around May Day and, as well as the ubiquitous May Pole, the celebrations build to the Jack being beaten in order to bring in summer. It is traditionally a raucous affair (which I can attest to). The Jack surrounded by his bogies is paraded through the town up onto a hill top. Accompanying him on his journey are Morris dancers, animal-headed people, and a plethora of people in green.

You can see the Jack in the photograph on the right up on the plinth surrounded by his followers prior to being beaten. I am assured that they take the gentleman out of the Jack before they start the beating. According to the Jack-in-the-Green website, this tradition started in the 16th and 17th century and was carried on in Hasting until 1889, before being revived in 1983. This is also confirmed by the Company of the Greenman.

However, as with many folk revivals, what it means and where it originates from is something that depends on the person discussing it. Some argue that it harks back early Pagan behaviours which have continued to exist under the guise of Christianity. Others think it is actually a Christian folk festival that evokes English sensibilities. In all honestly, I am inclined to think that its true meaning is in the pleasure of ritual and tradition. It creates cohesion, identity, and is a great excuse for drinking whiskey at 10 o’clock in the morning. (As the pictures show, the

weather was not excellent). 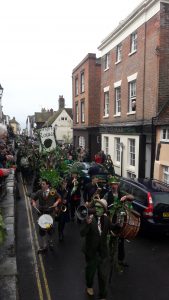 The British may be known for being reserved but I think we secretly enjoy dressing up and letting our hair down. Putting on face paint allows us to lose our inhibitions and gives us a day off from the strictures of polite decorum. I thoroughly enjoyed seeing some rather bemused tourists getting their noses greened by buxom wenches in tight-laced bodies. Each year, the festival is renewed, much like the seasons and the performance of this ritual brings much pleasure. I’d love to see more folklore(ish) events taking place.

I was also pleased to see a wolf amongst the rev 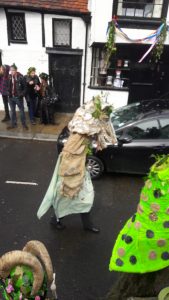 ellers. As Sam’s post about the English eerie and (were)wolves discusses, an engagement with our hidden or lost national past is also a way of acknowledging the cruelty we have enacted on the natural landscape. Deforestation and the destruction of indigenous animal populations haunts the landscape as much as human-on-human violence. This pale wolf, walking along an ancient road, reminds us of what we lost and what may return in a truly uncanny way. 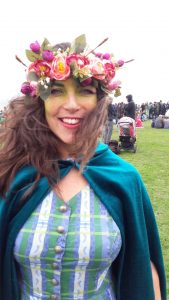 To end on a lighter note, here’s a picture of me in my May Day get-up looking suitably like someone who might entreat a policeman to climb into a giant wicker structure. (And apparently enjoy it).

This entry was posted in Critical thoughts, Fun stuff and tagged English folklore, jack in the green, May Day. Bookmark the permalink.