Direwolves: Dogs in Wolves’ Clothing in Game of Thrones 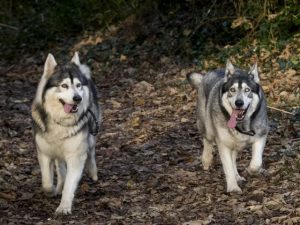 OGOM’s ‘Redeeming the Wolf’ event explored how literature, folklore, fairytale, and film have shaped our perceptions of the wolf and could be impeding its return. Odin and Thor (above) are two ‘wolf dogs’ from Northern Ireland who play ‘direwolves’ in the HBO series Game of Thrones.  The dogs have their own Facebook, Twitter and Instagram accounts and are insured for one million each. They  played ‘direwolf’ pups Summer and Grey Wind in season 1. Much of the show is filmed on location in Northern Ireland and the dogs are Northern Innuits. The significance of the ‘direwolves’ has been the subject of much speculation in newspapers such as the Huffington Post which suggests that The Direwolves are More Important Than You Think (ooh – the reasons why are rather elusive, however, as shown in the extract below):

The introduction to the near-mythical direwolves was more than just Martin’s/HBO’s way of pleasing the puppy-lovers in the audience. In actuality, the direwolves have very important roles to play on “Game of Thrones.” Interestingly enough, it appears the direwolves were some of the first “characters” Martin considered for his series. As the author told Mashable in 2014, he always had a fascination with the werewolf legends as a kid and simply picked the wolf as the House Stark sigil from a gut feeling. But, of course, the direwolves do serve a bigger purpose than just being a throwback to his childhood.

The owner of the direwolf acting dogs, Mr Mulhall, was quoted in the press as saying ‘Odin and Thor […] are a wolf look a like breed, the closest dog breeders can get to a wolf without a licence’. Celebrities have apparently tried to buy these dogs for huge amounts and there are a growing number of enquiries from people wanting similar wolf dog pups. Here are Odin and Thor’s Game of Throne cameos:

There is no doubt that the ‘direwolves’ are spectacular but the story of humankind’s relationship to these animals (dogs in wolves’ clothing) is perverse. It seems we admire these dogs because they look like untamed wolves, whilst simultaneously desiring to make them yield to us. Do we invite wildness in only to contain it? They represent the complex nature of hybridity – celebrated as pets for their ‘inbetweeness’ but made to appear  fully wolf for the delight of the viewers!

Look out for OGOM’s next publication: In the Company of Wolves: Werewolves, Wolves, and Wild Children – Narratives of Sociality and Animality, ed. by Sam George and Bill Hughes (Manchester University Press, 2018)

Associate Professor of Research, School of Humanities, University of Hertfordshire Co-convenor OGOM Project
View all posts by Sam George →
This entry was posted in OGOM: The Company of Wolves and tagged Direwolves, Game of Thrones, Northern Innuits, wolf dogs, Wolves. Bookmark the permalink.

2 Responses to Direwolves: Dogs in Wolves’ Clothing in Game of Thrones