The werewolf is the spectre brother of the wolf and one of the highlights of the conference was always going to be our visit to walk with wolves at the UK Wolf Trust. We left the university at eight in the morning after some rather lively socialising at supper the night before (one or two empty places on the coach) and headed for the sanctuary. It is difficult to put into words how special and thought provoking our company with wolves was. We learned a lot and the wolves were howling loudly and singing to us during our talk!!

The wolves all have names and biographies and there is even a wolf graveyard:

I was excited by the prospect of howl nights!!

We were accompanied on our trip by the UK’s foremost wolf specialist Prof. Garry Marvin who spoke on our return in a keynote entitled ‘The cultural image of the wolf and the wolves reemergence in Europe’. Some important and controversial issues were debated here and there was time for more wolf biscuits before the afternoon sessions…. 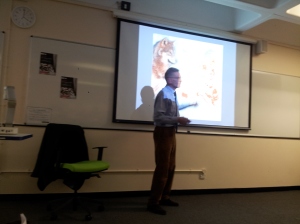 We still had more panels, Stacey Abbott on the cinematic werewolf, the ‘Lycanthropic Lantern of Fear’ show, and ‘In Red Riding Hood’s Basket’ conference dinner to come…what a day…this could only happen at ‘Company of Wolves’ !! Absolutely wolftastic from beginning to end. More stories soon.

Associate Professor of Research, School of Humanities, University of Hertfordshire Co-convenor OGOM Project
View all posts by Sam George →
This entry was posted in OGOM: The Company of Wolves and tagged Company of Wolves, Werewolves, Wolves. Bookmark the permalink.

0 Responses to Company of Wolves at UK Wolf Trust