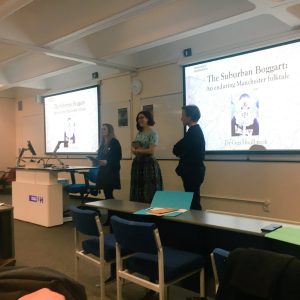 Thanks to our wonderfully weird speakers and keynotes, OGOM and Supernatural Cities presents ‘The Urban Weird’ was extremely inspiring on the research front and probably the most fun it is possible to have at an academic conference! It seemed to have had everything from boggarts, big bugs, fairies, ghosts, golems, and mummies, to vampires, trolls, and witches (and even albino penguins).

The conference showed that there is still lot to say about ‘the weird’, and Mark Fisher, author of The Weird and the Eerie (2016), was much quoted and debated as a theorist throughout the proceedings, along with Lovecraft, whose notion of  the supernatural (1925) involves a breathless and unexplainable dread of outer unknown forces.

My own sense of the ‘weird’ developed from these definitions, together with real life experiences that saw me come face to face with the lost children of Hamelin, those families in Romania with German sounding names who claimed to be the descendants of the children who were spirited away by the Pied Piper.  Well, they say fascination mixed with certain trepidation is integral to the weird! Transylvania is believed by some to be the final destination of the lost children and a certain otherness and outsiderness continues to attach itself to this place, and those associated with it, in the British imagination. My exploration of city demons from Dracula to Nosferatu and the Pied Piper, explored this aspect of the urban weird. 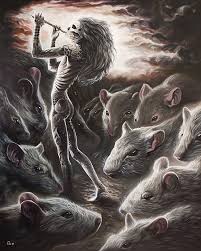 According to Mark Fisher, the weird is a particular kind of unsettlement, involving ‘a sensation of wrongness’, something that ‘should not exist in the here and now’. Many of the papers addressed this idea in original and compelling ways. For my own part, it was fun to dismantle Fisher’s notion that black holes are weirder than vampires. In fact, vampires and werewolves are not deemed weird at all by him, as they conform to particular lore and behave in a manner that is entirely expected of them (hmm). Elsewhere at the conference, the weird was imaginatively interrogated in relation to its related terms of ‘eerie’ and ‘uncanny’. 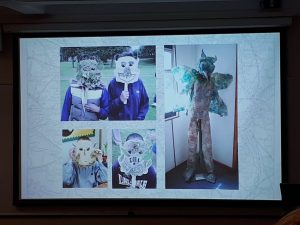 So to summarise the conference – on day one we began with a boggart workshop led by Dr Ceri Houlbrook (some weird Mancunian mischief here). 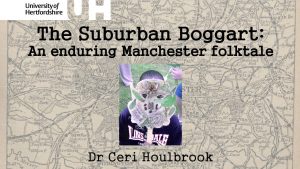 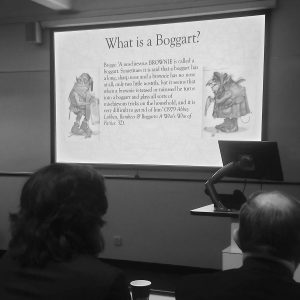 After a morning of panels on ‘Urban Myths and Fairy Tales’, ‘Weird Victorians’, ‘Ghosts and Spectrality’, it was time for lunch, followed by more panels on ‘China Mieville’, ‘The Virtual Weird’, and ‘Nineteenth-Century Europe and the Weird’. The OGOM Urban Weird biscuits, decked with our winged skull symbol, arrived mid afternoon to help us celebrate the weird moon that was rising!! 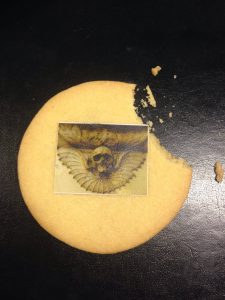 This was followed by our first keynote, Dr Karl Bell of Supernatural Cities, on ‘Dark City: Daemonic Architectures: Towards a Cartography of the Urban Weird’. The weird was gloriously and very insightfully interrogated here and this really set the scene and uncovered many of the key themes we were to grapple with over the 2 days. 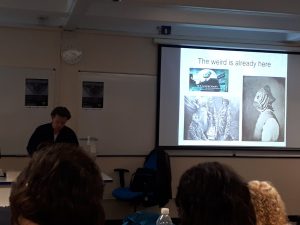 Panels in the afternoon included ‘Paranormal Romance’ with OGOMers Dr Bill Hughes (urban fantasies of Paris and London in YA fiction) and Dr Kaja Franck (trolls and environmentalism in Holly Black) presenting their research. The panels on ‘Killers of London’, and ‘The Politics of Horror’ ran in parallel. There was supper in the bar, prior to a mesmeric screening of Haxan: Witchcraft Through the Ages (1922), with an informative and lively intro from Dr Mikel Koven. Late night drinks and animated discussions ensued and a growing sense of excitement about day two. 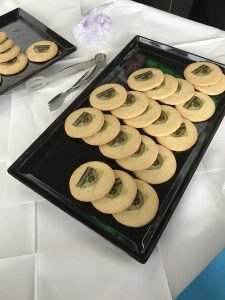 Saturday kicked off with panels on ‘The East and the Weird’, ‘Weird London’, ‘The Urban Weird and Fantasy’, and then it was time for my keynote, ‘City Demons: Urban Manifestations of the Pied Piper and Nosferatu Myths’. 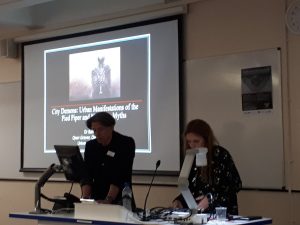 This excursion into the weird in fairy tale and myth was followed by ‘Weird Archaeology’ (where OGOM PhD candidate Daisy Butcher spoke on The Mummy) and ‘Weird Resistance’, then lunch. Prof. Owen Davies on ‘Supernatural Beliefs in Nineteenth-century Asylums’, added to the interdisciplinary nature of our discussions, with insights into real life cases involving belief in witchcraft, magic, and the fey. 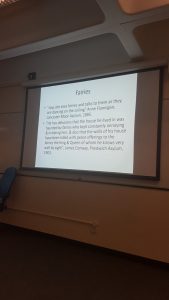 At four, we all boarded a bus to for the Spectral St Albans Tour. This part of the conference was inspired by the weird or the eerie, and those uncanny or submerged histories that give play to the imagination and rise up to frame spatial narratives. St Albans is built on the Roman city of Verulamium, razed to the ground by Boudicca. There is a secret spectral history that lies within Hertfordshire’s finest ghost city, therefore. In researching the tour, we discovered that St Albans is home to a succubus or female grotesque: 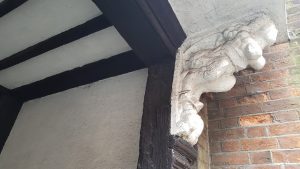 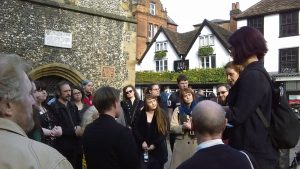 The tour, which took in all of these sights, led us from the clock tower, to the abbey and prison, the OGOM headquarters (where our mascots Teddy and Willow made an appearance), the gateway to the Roman city of Verulamium, St Michael’s Church and village, Kingsbury Water Mill,  and Wicca dwellings on Fish Pool Street. 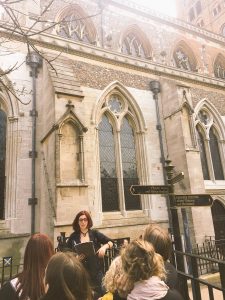 We concluded at Ye Olde Fighting Cocks, which is said to be the oldest pub in England. The octagonal half-timbered structure was once a medieval dovecote. There are underground tunnels stretching from the beer cellar in the Inn to the Abbey. These secret passages were regularly used by the monks.  In fact ghostly monks still haunt the Inn!! One morning in 2001, a terrified member of staff witnessed spectre monks emerging from the ancient cellar. What made the figures even more frightening was that they had no legs from the knees down. The ghostly monks glided across the room and sat down at a fireside table before disappearing. At other times the cellar keys have been found hanging on hooks swaying violently by themselves!! This was the perfect place to stop off before dinner and more weird chat. What a fantastically weird two days!! If you missed all the fun, you can view the full Urban Weird programme here

As I said, The tour included a viewing of the OGOM project ‘death’s head’ winged skull in St Albans Abbey 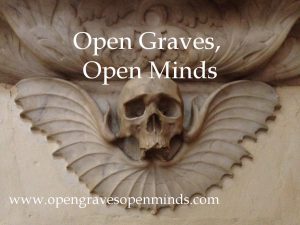 To commemorate the success of the conference, we have this eerie three-dimensional image of the skull, made specially by Dr Ken Lymer, who spoke on the weird archaeology of Lovecraft at the conference. How very uncanny. On behalf of OGOM, I’d like to thank everyone who presented or came along. It really was extremely memorable and enormous fun. Keep following us on Twitter @OGOMProject  and on the blog. You can see all the photos and live tweets at #UrbanWeird2018.