I have decided to introduce a new searchable feature on Gothic Hertfordshire on the blog ahead of Supernatural Cities 3 which OGOM will co-host in March 2018.  (‘Gothic Hertfordshire’ is now a Category, found on the right-hand side here.) I’ll be posting regular folkloric stories which may feature in our Gothic tour of the region (part of the conference programme). I began to collect these tales some time ago when I posted the Strange Case of the Gubblecote Witch. Ruth Osborne, ‘the Gubblecote Witch’, was ‘swum’  in sheets or ‘ducked’ by a local mob in 1751 at Long Marston in Hertfordshire, despite the death penalty for witches being abolished in 1735.  Since researching this story I have photographed places of interest and I am building up a grievous gazetteer of the myths and mysterious spectres, superstitions, crimes and calamities of the county. 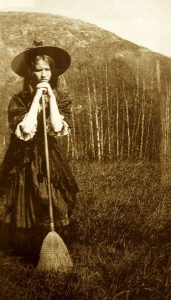 In Essendon, there is a tomb in the Churchyard of St Mary the Virgin, with a door to which only the corpse has the key. The occupant died in 1843 and left instructions that his tomb was to be built above ground and fitted with a locked door because he was so fearful of being buried alive. There are stories of the door discovered unsealed in 1881.  The village is 3 miles East of Hatfield via the Hertford Road. 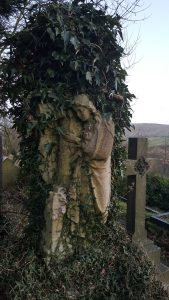 Little Gaddeston would certainly feature in any tour of Gothic Hertfordshire. It was here in an old cottage in Witch Craft Bottom (yes I kid you not) that Rosina Massey (1828-1907) was seen by a child conducting her cups and saucers in a dance around the table! She could likewise make her three legged stool run errands for her. She was commonly thought to be a witch and is buried in the churchyard inside the gate leading to the Vestry.

Little Gaddeston also has a place called Faerie Hollow, which incorporates the cottage in which Rosina-the-witch lived. Here, according to local folklore, in 1664 two small imps came riding down the chimney on a stick and so bewitched Mary Hall, the Blacksmith’s daughter, that she spoke in two voices, neither of them her own! 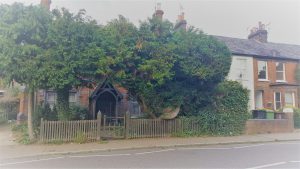 I photographed the cottage above today and it exists despite it appearing to resemble something from Hansel and Gretel.

That’s all until the next time….look out for regular features on Gothic Hertfordshire.