Since Dracula is in the news just now following my stint on the BBC World Service  I thought I would mention an essay I wrote on the novel which grew out of OGOM’s collaboration with scholars at the University of Timisoara in Romania. Kaja and I have both visited and contributed to symposia there. My essay is inspired by my visits to Romania and the novel’s troubled history in that country. After my first visit I was invited back to deliver a plenary at the ‘Beliefs and Behaviours in Education and Culture’ conference  I blogged on my return about Bram Stoker’s ambiguous legacy and the fact that generations of Romanians were not allowed access to the novel.  Ceauceascu banned the novel and film of Dracula so those coming of age in Romania in the 1980s would not be familiar with the country’s most infamous resident.

Out of these debates has grown Dracula : An International Perspective, ed. by  Marius-Mircea Crisan in the Palgrave Gothic Series. The book draws on literature, tourism, and film and argues that the development of the Dracula myth is the result of complex international influences and cultural interactions. My essay is entitled ‘Spirited Away: Dream Work, the Outsider and the Representation of Transylvania in the Pied Piper and Dracula Myth in Britain and Germany’.The book which also boasts essays by William Hughes, Clive Bloom, Carol Senf, Duncan Light, John Edgar Browning and others is out in December 1st st. You can order copies here! 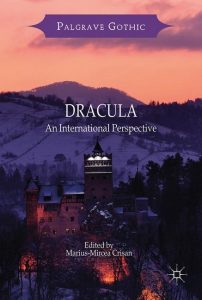