OGOM Company of Wolves: The Book

Woo hoo. We are proud to present the details of the OGOM Company of Wolves book (MUP, 2017). There are 3 publications in total (one book and two special journal issues) and this is the first. More to follow on the other two. We think you’ll agree that it looks very special indeed and it is a fitting legacy re: our fabulous conference. Thank you to everyone who has made submissions to the project. More will be revealed shortly. Wolftastic!! 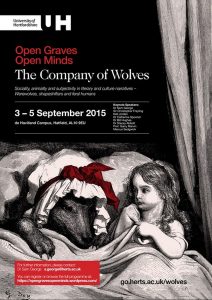 The Company of Wolves: Werewolves, Wolves, and Wild Children – Narratives of Sociality and Animality

This volume of essays presents further research from the Open Graves, Open Minds Project at the University of Hertfordshire (soon to be an internationally recognised research centre). It follows on from the previous MUP book, Open Graves, Open Minds: Representations of vampires and the Undead from the Enlightenment to the Present Day. The collection connects together innovative research on the cultural significance of wolves, wild children, and werewolves from a variety of perspectives as portrayed in different media and genres ranging through folktales and Gothic literature through sound, fashion, film, and TV, to contemporary poetry and visual art. In the book, eminent scholars and early career researchers cover a range of narratives and discourses: stories of feral children which question the boundaries between animal and human are explored alongside considerations of the cultural significance of the wolf in nature and analyses of the modern werewolf from nineteenth-century Gothic through early cinema to present-day TV and Young Adult fiction.

The book explores crucial questions concerning human social existence and its animal substrate, and the intersection between the human and the wolfishly bestial as expressed in narrative media from a variety of epochs and cultures. It forms a coherent whole; though covering a fascinating diversity of topics, the essays have been selected and guided towards highlighting certain recurring motifs which are drawn together by an erudite introduction.

We begin with the wolf itself as it has been interpreted as a cultural symbol and how it figures in contemporary debates about wilderness and nature. Alongside this, we consider eighteenth-century debates about wild children ­– often thought to have been raised by wolves and other animals – and their role in key questions about the origins of language and society, moving to the fictional representation of such children. The collection continues with a series of essays on werewolves and other shapeshifters as depicted in folk tales, literature, film, and other media, concluding with a section on the transition from animal to human in fashion, art, and poetry.

Wolves have long been the archetypal enemy of human company, preying on the unguarded boundaries of civilisation, threatening the pastoral of ideal sociality and figuring as sexual predators. Yet, in their way, with their complex pack interactions, they have served as a model for society. Lately, this ancient enemy has been rehabilitated and reappraised, and rewilding projects have attempted to admit them more closely into our lives. Our company with wolves has inspired fiction from Ovid, through Perrault and the Grimms’ narrators, to Bram Stoker and Kipling; and, more recently, to Angela Carter, Neil Jordan, Anne Rice, Marcus Sedgwick and Glen Duncan.

Werewolves and shapeshifters have served in narrative fiction to question what humanity is; weres tend to reveal the complex affinities and differences between our existence as linguistic, social subjects and our physiological continuity with other animals. They also draw our attention to questions of hierarchy and sexuality, to the instinctive, and to what extent our conceptions of these are ideological.

Werewolves (along with vampires) have recently become humanised, even romanticised, as identity politics has become mainstream and the Other assimilated. As with the vampire, werewolves invite analyses about otherness, as this collection demonstrates. And just as the vampire figure both conditions the shape of the subgenres it dwells in and draws other genres into its sphere, so fictions about werewolves, wild humans, and human-animal relationships also invoke questions of genre and intertextuality. The essays in the collection address these issues.

Amidst concerns about our relationship with nature, in a culture informed by Romanticism and a post-Enlightenment doubt about the centrality of humanity, contemporary fictions often turn to the animal, and to transitions between animal and human to interrogate what is special about our species. In her werewolf paranormal romance, Shiver, the YA author Maggie Stiefvater quotes Rilke: ‘even the most clever of animals see that we are not surely at home in our interpreted world’. This captures the amphibious nature of being human and raises the kinds of questions that these essays explore and illuminate.

Cultural images of the wolf, the werewolf and the wolf child

The inner beast: Scientific experimentation in George MacDonald’s The History of Photogen and Nycteris 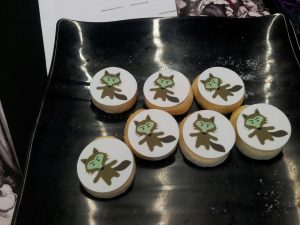