Wolves in the Asylum at the Wellcome 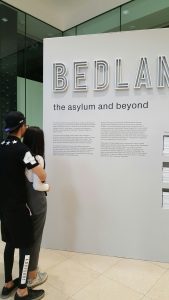 I visited the new exhibition on Bedlam at the Wellcome this week and was thrilled to find the wolf paintings of Freud’s ‘Wolfman’ on display. As we are currently working on the publications from the Company of Wolves conference it seemed particularly serendipitous and compelling. Sergei Pankejeff (1886-1979) was the subject of one of Freud’s most famous case histories. Freud predictably argued that his childhood dream of wolves  represented a ‘primal scene’  of psychosexual development. Freud’s eventual analysis (along with Pankejeff’s input) of the dream was that it was the result of Pankejeff having witnessed his parents having sex a tergo ( ‘from behind’ or ‘doggy style’) — at a very young age. Later in the paper Freud posited the possibility that Pankejeff had instead witnessed copulation between animals, which was displaced to his parents. Pankejeff depicted  the dream that gave him the name ‘Wolfman’ in 1975 when he was nearing the end of his life. It shows five white wolves  in a frozen landscape sitting in a stunted tree.  I was fascinated to see this work for the first time yesterday. Interestingly, Catherine Spooner has written about the significance of white wolves in her essay ‘Wearing the Wolf’ for the OGOM Company of Wolves volume. 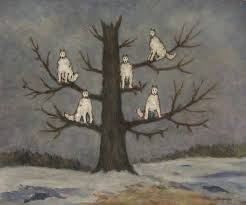 Amongst the other artists associated with Bedlam and featuring in the exhibition is Richard Dadd (1817-76), a convicted murderer famous for his fairy art. Dadd is mentioned in Joseph Crawford’s essay ‘No more than a brute or a wild beast’: Wagner the Werewolf,  Sweeney Todd and the limits of human responsibility’ in our forthcoming  Company of Wolves collection. He is discussed in relation to reason, insanity and animality. Do go to see this wonderful show if you get the chance (and look out for the publication of OGOM: Company of Wolves next year).

Elsewhere I was intrigued by the Empathy Deck, a new digital commission by artist Erica Scourti.  This has a live Twitter bot that responds to your tweets@empathydeck…genius.

Below ‘All Men Mad: or England A Great Bedlam.  A Poem’ from the exhibition. This was printed on the 14th September in the year 1704 and yet it seems strangely appropriate to our times. What foresight!  I love this! 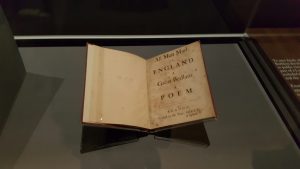