We’re excited to announce that OGOM is involved in two events for the Being Human Festival. Here are details of the first one:

Redeeming The Wolf: A Story of Persecution, Loss and Redemption 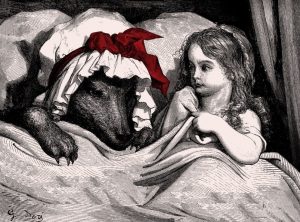 Hunted to extinction in Britain, wolves haunt the human imagination. Stories of the wolf have portrayed a vicious, snarling beast that emerges from the wilderness to attack humankind. The werewolves of popular culture have further fomented fear. But the lost wolf is making a comeback: conservation groups are working to reintroduce the animal to the British countryside. This event brings together scholars, writers, and conservationists to explore how literature, folklore, fairytale, and film have shaped our perceptions of the wolf and could be impeding its return. A short film introduced by the UK Wolf Conservation Trust will precede a series of lively illustrated talks from Prof. Garry Marvin (lupophobia), Dr Sam George (wolf children), Dr Kaja Franck (monstrous werewolves), and Dr Bill Hughes (beauties and beasts). The audience will then be invited to debate the implications of redeeming and rewilding this much-maligned ‘big bad wolf’ and what the wolf can teach us about being human.

This event builds on the success of the OGOM Research Centre and our Company of Wolves project, which saw the largest conference in the UK on wolves, werewolves, and feral children. We received unprecedented attention in the local, international and global media (10,000 shares for coverage in The Independent, live coverage on the BBC, stories in Russia Today and the South China Post, etc., and the acknowledgement of a first for a UK Academy in the THES).