What 3 Words Best Describe the Wolf?

Following Kaja’s post on reclaiming the werewolf I wanted to say that I am speaking on the myth of wolf children or children raised by wolves at the OGOM event on Saturday 18th. These stories allow for a benevolent, humanised and nurturing wolf that is inconsistent with the big bad wolf of fairy tale. The theme is lost and found. If we can embrace these alternative stories we can redeem the wolf, allow it to return to our forests, subvert the fairy tale that we have all grown up with, and create a new narrative for the 21st century. We’ve planned a number of activities to gauge the audience’s perception of the wolf such as our 3 word challenge below (3 words to describe the wolf on arrival and then again after our talks, screening and public debate) 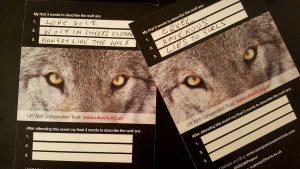 And the OGOM wolf cakes are back. 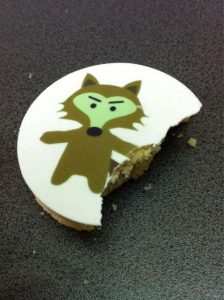 It’s super exciting. Thirty tickets remain which can be snapped up via the Being Human website here

Do come down to see if the wolf can be redeemed (and reintroduced in the future in the UK). It’s going to be the stuff of myth! Join us too on Twitter #redeemthewolf