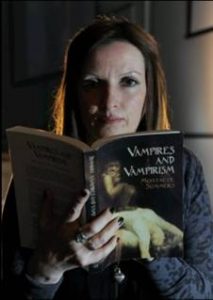 It is that time of the year again when I’m anticipating a new run of my ‘Reading the Vampire’ MA module . I’ll be embarking on all the bloodsucking basics with my new MA students in just a few weeks time (extra credit to anyone who scores an interview with a vampire). In 2010 when the course was launched the undead had a fairly troubled relationship within the academy and I struggled to get it approved amidst a mini media frenzy and much scepticism. In 2017 the dark gift of vampirism as a study within  the university is enduring.  I’ve found new approaches to the texts and I’ve recently added a new strand of study which explores the relationship between Peter Pan, The Lost Boys and Let the Right One In through the trope of invitation (even Dracula has to be invited over the threshold!).

What has struck me most in the last three years is the exciting growth in new critical material on the literary and filmic vampire. The key text for the module is of course the Open Graves, Open Minds book  but there is a wealth of new criticism which (building on the legacy of Ken Gelder and Nina Auerbach) takes vampire studies into the twenty- first century. Fandom, cultural materialism, Neoliberalism, biomedicine, violence and the sacred, and similarities with the sympathetic zombie are all offered up as useful approaches to the post millennial vampire in recent monographs.  In 2017 the course has the following books to enrich and inform it:

These are nicely lodged in the university library! I should also mention the hilariously named Men with Stakes (Manchester: MUP, 2016) by Julia Wright. A new study on masculinity and gothic television from the brilliant MUP Gothic list. For my own part I’ve returned to folklore in much of my analysis. My article on the representation of Romanian folklore in British and Irish Fictions of the Undead (which started life as a plenary talk at the University of Timisoara, Romania) is in press and ‘Spirited Away: The Outsider and the Representation of Transylvania in the Pied Piper and Dracula Myth in Britain and Germany’ is published next month in Dracula: An International Perspective in the Palgrave Gothic Series.  I’m writing on the enigma of  Wharram Percy and I continue to research and have an interest in early accounts of vampirism in the UK, together with the vampire theatre pre-Stoker, the psychic vampires of Victorian and Edwardian popular fiction and the contemporary child/teen vampire. In 2017 the arterial blood of vampire study is far from exhausted – it continues to flow and circulate. I’ll be excitedly initiating new students into this infectious branch of gothic studies in September.