Vegan Vampires (or How to Make Human Blood with Beetroot Juice)

Posted on 1st February 2017 by firekrank

I have a confession to make: I’m incredibly squeamish. This is not a problem in itself but if you interests include monsters, especially vampires, piercings and tattoos, announcing that you get woozy at the sight of blood causes a few titters. (Not to mention the embarrassment of passing out whilst getting your septum pierced). It appears to be a family curse as I have many memories of my dad passing out every time he cut himself or had to get an injection. (This is also not a good thing if you are a technology teacher as accidents do happen).

In this vein, my friends and I started discussing the cruel reality for a vampire who was afraid of/ faints at the sight of blood. This is something that has been broached before both in Lynsay Sands A Quick Bite (2005), and in this wonderful short film about a blood-fearing vampire called Erebus visiting a psychiatrist (which, I should warn you, contains many swearwords). I’m discounting Count Duckula and the Cullens because their vegetarianism is for ethical reasons rather than being caused by a phobia.

Given that my Victorian-heroine-constitution gets worse with low blood sugar, I had an image of a hungry vampire seeking out their prey, biting them and then coming round five minutes later to discover that their victim has escaped and, to add insult to injury, they’re still starving. What then is the modern vampire meant to do?

Ultimately, veganism seemed the way forward for this particular vampire – it is so hot right now. This was followed with much discussion of the nutritional content of blood, and another time in which my search history makes me look like a serial killer. Whilst eHow explains how to ascertain the calorific content of blood, there are two contradictory reports of regarding the safety of having blood as your only means of nutrition: one points out the risks of high iron diets and the other acknowledges the incredibly high salt content of human blood.

From this limited and entirely unscientific internet search I set on a mission to create a vegan version of human blood. Naturally, I started with beetroot juice simply for the aesthetics. 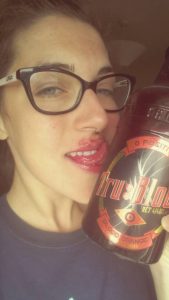 I regularly drink beetroot juice and I can confirm that drinking it from a ‘True Blood’ bottle is the only way to go as the picture on the left proves. As it turns out, beetroot juice is a good source of both iron and vitamin C (which helps with the absorption of iron).

I was a bit stuck on the salts front, as lots of salt is not good for us who carry the family curse of high blood pressure. So, I decided coconut water would have to suffice as it is a natural isotonic and has relatively high amounts of sodium. (Do vampires sweat a lot? Do they need to replace those isotopes after a session of being super human? Who knows?) And, because it was my lucky day, it turned out coconut water has iron and vitamin C in it.

Now for the iron content: I chose a mixture of kale – because it can hardly be called a smoothie nowadays if it doesn’t have kale in it – and an iron supplement in liquid form. The one I chose, and I believe there are plenty out there, also includes copper which, bonus points, is also present in human blood. Finally I added a little protein powder to stand in for the proteins that can be found in plasma.

So here it is, my patented* blood smoothie recipe:

(NB: This smoothie is only suitable for vampires and has not been tested on humans).

I’ll try to test it out and get back to you on whether or not it makes me feel as though I have gorged on red blood cells. My Gothic Halloween cake (red velvet, of course) was relatively successful so perhaps Gothic recipes should become a regular on the blog. 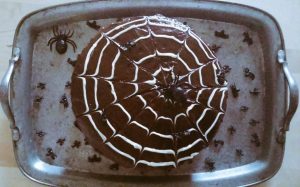 *I should clarify, I am not a medical doctor, and whilst this had not prevented many people from making a killing on the faux-nutrition market, I wouldn’t want to be accused of giving unhealthy advice.

This entry was posted in Fun stuff and tagged blood, Vampires, veganism. Bookmark the permalink.