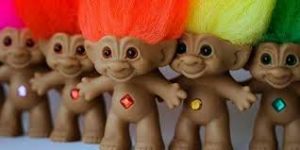 Apparently a Troll Doll is also known as a Dam Doll after their creator Danish woodcutter Thomas Dam, or as a Gonk Troll outside the US. There is a Danish connection for you here Kaja. Again, in Cumbria we would use the word ‘Gonk’ to refer to an ugly woodland creature and I had a toy gonk too! Troll dolls  were originally created in 1959, and became one of the United States’ biggest toy fads in the early 1960s as Bill says, but they became fads again for brief periods in the 1970s (mine date from this period) and they also enjoyed a further vogue in the 90s. Dreamworks have purchased the rights to troll dolls and are releasing a film in 2016! How timely! These are not very folkloric however and seem to be plump and blue like The Smurfs. The Smurfs (French: Les Schtroumpfs; Dutch: De Smurfen) is a Belgian comic and TV franchise about a colony of small blue creatures who live in mushroom-shaped houses in the forest for those who are not so familiar with them.

It could be that 2016 is the year of the troll but it would be nice to rescue the fierce folkloric troll from the friendly cartoon version and also wrestle trolls away from the appropriation of them found in the word ‘trolling’ to refer to internet bullies. These are also interesting manifestations of the troll of course. Troll fashion anyone? 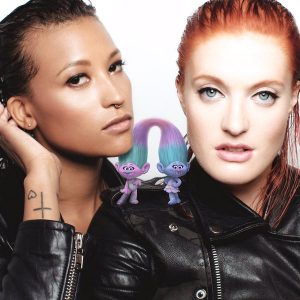 You can search under ‘Troll’ on this site and see our responses so far. Thanks to Kaja for starting this fascinating discussion and writing so eloquently about her own engagement with folkloric trolls in her post on The Artistic Troll.