Accio! Harry Potter in his Thirties

Photographs have been revealed of the cast of Harry Potter and the Cursed Child. Jamie Parker plays the grown up Harry Potter now in his thirties and his wife Ginny is played by Poppy Miller. The ‘cursed child’ of the title is Albus Serebus Potter their son, played by Sam Clemmett. 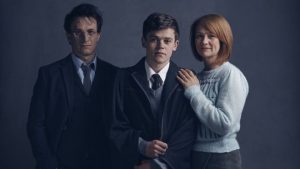 Audiences will be able to see one play presented in two parts. Both parts will run in the theatre simultaneously, split between matinee and evening performances the BBC reports. Harry looks a little bit like a philosophy lecturer that I know in these pictures (which is fitting since philosophy and alchemy are traditionally synonymous with the dark arts). I quite like the rather tweedy look. I am glad he has married an interesting looking red head too (in keeping with the wonderful Willow in Buffy and Nicole Kidman’s witchy character in Practical Magic).

I am more than ready for this theatrical experience… ‘Accio’ or should that be ‘Rennervate!!’

Associate Professor of Research, School of Humanities, University of Hertfordshire Co-convenor OGOM Project
View all posts by Sam George →
This entry was posted in Fun stuff, Generation Dead: YA Fiction and the Gothic news and tagged Harry Potter, Harry Potter and the cursed child. Bookmark the permalink.