Books of Blood: Adventures in the Archives

I have been in the archives of the Wellcome Collection housed at the Science Museum this week to finally view the objects we have shortlisted for our Books of Blood Exhibition and Festival. The objects are kept behind locked doors in giant safe-like rooms in an old Post Office Savings Bank near Olympia. The entrance is gated off with its own intercom and I have to say it is possibly the most curious and disturbing place I have ever visited.  I saw everything from medical mannequins with their insides exposed, to early prosthetic limbs (some with children’s shoes attached), oh and a room full of iron lungs.  It’s gruesome but there are also wonderful folkloric objects relating to belief from around the world including the most incredible collection of ritual masks I have ever seen (at least one was of a wolf). There were also a number of models of martyrs with their bloody histories on display (Michael Landy’s Saints Alive comes to mind here – I loved that show). I had already spent many an hour browsing online catalogues and databases but nothing had prepared me for the size and scope of the collections (as only a small percentage have been digitised and some of the rooms have not been opened for many years). It was a bit like entering Tutankhamen’s tomb so many treasures did I see (and I did encounter bandages if not fully blown mummies!).

I was working alongside Bryony who is an expert in conservation in relation to these rare objects. Our first task was to find the keys to the correct doors and cabinets –  they must have amounted to around thirty as within each locked door are several locked cabinets and there were literally hundreds of keys of all shapes and sizes hanging up. We set out along a labyrinth of corridors like modern day Marley’s ghosts rattling our chains.

The first object I saw was the mandrake which was concealed in straw in an old box tied with string on the bottom of a whole cabinet of shelves (all containing similar boxes).  Mandrake roots have long been associated with pagan beliefs and magic. They have often been attributed with special powers or healing properties. They have also had a range of medical applications. Mandrakes are anthropomorphic objects whose shape resembles that of a human. They are said to scream when pulled from the ground. We joked that this one is playing the pipes but given its shape and its associations with fertility a rather ruder explanation comes to mind! It is certainly a very potent symbol of male fertility though it is worth noting that in ancient Greece, wine infused with mandrake root was used to numb patients before surgery.  I feel very privileged to have seen this. It dates from the 1500s. 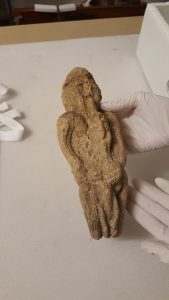 Also from this period is this wonderfully carved ivory skull representing life and death. One side shows a human face crawling with worms; the other side shows a skull crawling with toads after the worms have eaten away at the flesh. Not much is known about this skull but it is thought that it is a memento mori – literally a reminder of death and the shortness of life. The skull is carved with the most exquisite skill and despite its diminutive size it is absolutely stunning. 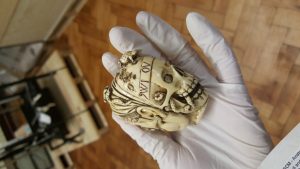 The third object I am going to reveal that we have selected for the show is very curious indeed. It is the model head of an executed Chinese Yangstze river pirate. It is made of plaster. The long ponytail is real human hair. It is particularly gruesome because it depicts the head in great anatomical detail. Arteries, veins and spinal cord are accurately modelled across the severed neck. The head also has its own bloodstained carrying box. The origins and purpose of the model are uncertain. It was possibly used in an exhibition early in the last century. After over a hundred years in the archive its time to open up that box again (though getting these through customs and up to Limerick will be one of the most challenging things I have ever attempted). 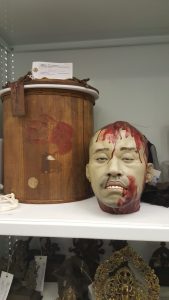 My time in the archives has been extraordinary. I’ll be blogging further about the remaining chosen objects. I only hope our funding comes good so that we can bring these remarkable objects out of the archives and into the light and allow you to see them as part of our touring Books of Blood show.  Thanks to Dr John Rimmer and Dr Tracy Fahey my co-conspirators in blood for their input and unwavering support.  Let’s do it!

2 Responses to Books of Blood: Adventures in the Archives