John Berger’s groundbreaking essay ‘Why Look at Animals’ (1980; Penguin, Great Ideas, 2009) has inspired a new exhibition ‘Animals and Us’ at the Turner Contemporary Gallery in Margate. Berger argued that the ancient relationship between man and nature had been severed in the modern consumer age. The animals that used to be at the centre of our existence were marginalised and reduced to spectacle. 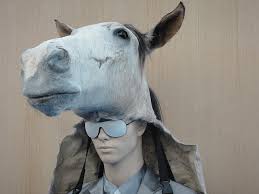 The exhibition boasts an ancient Egyptian figurine of the cat-headed goddess Bastet, from the collection of Sigmund Freud. This is juxtaposed with Michal Rovner’s 2017 video portraits of jackals and a film of Joseph Beuys’s 1974 performance I Like America and America Likes Me, documenting the three days he spent locked in a cage with a wild coyote. Laura Ford’s sculpture, A King’s Appetite is a large, crudely made giraffe, lying flat with its head on a cushion. It represents the first giraffe to come to Britain in 1827, a gift from Egypt to the King. It was transported on the back of a camel across the desert, and then shipped to George IV’s menagerie at Windsor castle; unsurprisingly, it only lived for two years. 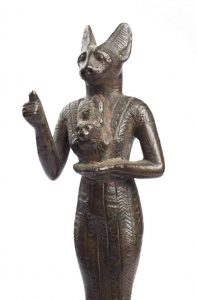 The most radical works in the exhibition go beyond ‘looking’ and try and break down the barriers between humans and other animals. For Tracey Emin, a fox represents the elusiveness of human love in her video essay Love never wanted me. Andy and Peter Holden’s A Natural History of Nest-Building is an homage in video and sculpture to the inventive architectural structures created by birds. It raises questions about the supposed uniqueness of the human imagination. Are we really the only species that can appreciate beauty? Is creativity as uniquely human as we think?

Meanwhile, Candida Hofer’s sorrowful photographs of animals in zoos reflects the tragedy of those wild at heart, now caged for our entertainment.  In March, the last male northern white rhinoceros died  highlighting a huge extinction crisis. Reports confirm that around 60 percent of chimps and primates and one in eight bird species are threatened with global extinction. It’s thought that up to 100,000 species of animals become extinct every year. The great auk disappeared in the mid-19th century. It was flightless and easy to catch. Its soft down was used to stuff cushions.  Marcus Coates’s film shows him in the bird’s native habitat: Fogo Island in Canada. He meets with the mayor, to make a speech, ‘Apology to the Great Auk’. The mayor delivers  the words to the sea, in front of a small audience, as he promises to protect future species.

In another artwork, Coates becomes animal, hanging half way up a Scots pine, inhabiting the position usually occupied by the Goshawk as it looks for prey. In Stoat, he wears wooden stilts designed to make him move as a stoat does. He stumbles always on the verge of falling.

The themes in this new show will appeal to those who attended OGOM’s Company of Wolves Conference and our Being Human event ‘Redeeming the Wolf’. Our book, In the Company of Wolves: Werewolves, Wolves and Wild Children – Narratives of Sociality and Animality (MUP, 2019), has developed out of these endeavours and it features an essay by Dr Sarah Wade on the artist Marcus Coates: ‘A running wolf and other grey animals: The various shapes of Marcus Coates’. At the time of the conference, Sarah was researching her thesis on contemporary artistic and curatorial engagements with wildlife in the department of History of Art at University College London; she has recently been awarded her PhD (congratulations!). Her timely essay on Coates will appear in ‘Animal Selves: Becoming wolf’ in our forthcoming book. You can see a synopsis of  the research paper it started out as here

Sir Chris Frayling, friend of OGOM and plenary speaker at the ‘Company of Wolves’ conference, was at the preview of ‘Animals and Us’. You can listen to his insightful commentary on Saturday Review, BBC Radio 4, 2nd June via the iplayer. 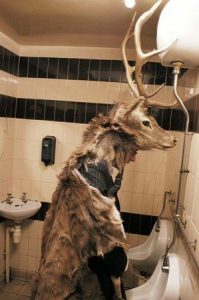