One of my PhD students Jillian has been writing on The Strain. For those of you who are not familiar with it The Strain is a 2009 vampire novel by Guillermo del Toro and Chuck Hogan. It is the first installment in The Strain Trilogy, and was followed by ‘The Fall’ (2010) and ‘The Night Eternal’ (2011). Apparently, Del Toro first envisioned the project as a television drama, but was unable to find a buyer for the series. An agent then suggested turning the story into a series of books with writer Chuck Hogan.  Following the success of the novels the series has finally come into fruition and is currently airing in Australia on ELEVEN, having had its UK run on WATCH in 2014. OGOM has previously made mention of Roger Luckhurst’s  take on the contemporary vampire including those in del Toro in  From Dracula to The Strain: Where Do Contemporary Vampires Come From  (which is worth revisiting). One of the aspects of del Toro’s novel that most fascinates readers is the hybid nature of the vampire zombies which are running amok in New York.  It is essentially an outbreak narrative:

In the run-up to a rare solar eclipse, a transatlantic flight full of dead bodies lands at JFK airport. Suspecting ebola or worse, the Centre for Disease Control deploys its “canary team”, led by abrasive virologist Ephraim Goodweather […] But the canary team can’t get their big brains wrapped around the concept of a vampire plague quickly enough to prevent it taking hold in the city (The Guardian, Sept, 17th, 2014).

You can read the full Guardian Review of the 2014 series here. 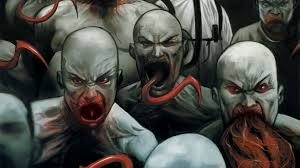 More recently, the actress Mia Maestro has given her take on The Strain’s metaphorical analogies between vampires and the death of the human spirit:

“Instead of creatures of the undead draining our souls, it’s the modern world and things like war, social division, junk food and over-consumption killing the human spirit […] I think there’s something about this era, the time that we live, that actually sucks our energy and life out of us,”

You can read her interview in ‘Vampire Thriller The Strain is Nothing Like You Have Ever Seen’  I will ask Jillian to post something of her research on these novels on the blog as they look worthy of further discussion I think. If you have read them or have seen the series do let us know what you think and add a comment below. If The Strain does not sound scary enough already Robin Atkin Downes, who provides the creepy, guttural whispers of the Master, also voiced reality show judge ‘Simon Cowbell’ in the recent Postman Pat movie.  The novel’s ideas about vampires, consumerism, and the death of the human spirit are biarrely mirrored here!! 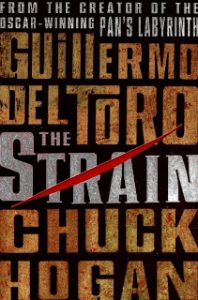 Associate Professor of Research, School of Humanities, University of Hertfordshire Co-convenor OGOM Project
View all posts by Sam George →
This entry was posted in Critical thoughts, Reviews and tagged The Strain, vampire television. Bookmark the permalink.