The majority of convicted witches in early modern Europe were women, and two female stereotypes became particularly powerful: the alluring young woman, and the dried-up old ‘hag’. Regardless of age, female witches were believed to be in sexual thrall to the Devil, who was the source of their power. Yet this power came at a price and revealed the Devil’s deceptiveness: witches were given gold that turned to dung, or seduced by handsome men who later revealed their true, diabolical form.

Visual images helped to establish these stereotypes. The story of the witch of Berkeley was illustrated for the first time in the 1493 Nuremberg Chronicle, told as part of a historical narrative in a Christian framework. The half-naked witch, wrapped in her shroud, is shown claimed by the Devil after her death as payment for the magical powers given to her in life.

My interest in witches is rather niche as I am focusing on the sympathetic witch in the mid to late twentieth century and recent manifestations of such a figure in contemporary Young Adult Fiction but this exhibition at the John Rylands Library looks wonderfully dark and informative and I will definitely visit it next time I am in Manchester. You can view my post on my past and future in witches here and visual images of witches including Goya 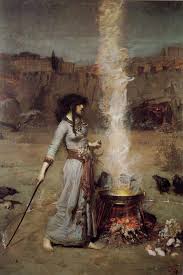 Download the catalogue for the John Rylands exhibition and go along!