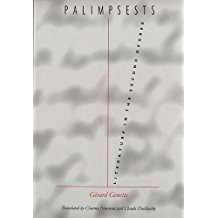 I am very saddened by the death of Gérard Genette (1930-2018). Genette, for me, was one of most rewarding of French literary theorists. He employed a structuralist methodology but in a way that avoided metaphysical excesses and that never lost sight of the particularity of the text. His pioneering work in narratology (in Narrative Discourse (1970) and then Narrative Discourse Revisited (1983)) read Proust closely to elucidate such ideas as voice, focalisation, and the temporality of narrative.

In The Architext (1979), he sets out, all too briefly, foundations for a theory of genre.  In Palimpsests: Literature in the Second Degree (1982), he explores the process that he calls ‘hypertextuality’ whereby literary works are constructed out of earlier ones through such devices as parody, expansion, and imitation. Here, he is lucid and erudite (the breadth of his reading is astonishing), and great fun too. Paratexts: Thresholds of Interpretation (1987) looks at how such peripheral apparatuses as prefaces, footnotes, and titles function as part of the literary effect of a work—this he calls ‘paratextuality’.

Sarah Bartlett and I drew on Genette’s ideas of transtextuality in a proposal here to represent the relationships between literary texts on the Semantic Web–a machine-readable format that creates meaning-laden links between resources. (‘Transtextuality’ is Genette’s more precise formulation of what is often called ‘intertextuality’ and it includes the notions of hypertextuality and paratextuality.)

I have also found Genette’s work in Palimpsests extremely useful in my current exploration of the reworking of fairy tales into YA paranormal romance and also of the evolution of that genre itself from the Gothic novel through the Gothic Romance of the likes of Daphne du Maurier and its interaction with and formation through other peripheral genres. Genette’s work is invaluable for anyone working on genre and narrative form.