As soon as the seal was clear of the water, it reared up and its skin slipped down to the sand. What had been a seal was a white-skinned boy 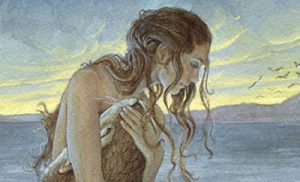 In response to the lively interest in my post on selkies and Kaja’s on the pain of transformation for werewolves I thought I would post a further extract on selkie lore describing their magical skins:

In the surviving folklore, there is no agreement as to how often the selkie-folk were able to carry out the transformation. Some tales say it was once a year, usually Midsummer’s Eve, while others state it could be “every ninth night” or “every seventh stream”.
Regardless of how often they were able to transform, the folklore tells us that once in human form, the selkie-folk would dance on lonely stretches of moonlit shore, or bask in the sun on outlying skerries.

A common element in all the selkie-folk tales, and perhaps the most important, is the fact that in order to shapeshift they had to cast off their sealskins. Within these magical skins lay the power to return to seal form, and therefore the sea.

If this sealskin was lost, or stolen, the creature was doomed to remain in human form until it could be recovered. Because of this, if disturbed while on shore, the selkie-folk would hastily snatch up their skins before rushing back to the safety of the sea. 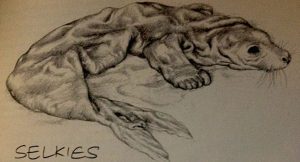 Bill is currently reading a very promising YA paranormal romance with selkies–and a witch too (praised by Marcus Sedgwick). It’s Margo Lanagan’s The Brides of Rollrock Island  and OGOM contributor Victoria Amador has made us aware of this selkie film, ‘The Secret of Roan Inish’ and there’s even a children’s selkie novel, Mollie Hunter’s A Stranger came Ashore–which looks good and has been well-reviewed.

Katherine Briggs (usually my folklore bible) is a bit short on selkies but she does have an entry on the Orkney Isles where seal maidens are among the commonest of fairy brides and ‘sometimes as in the Orcadian tale of the Great Silkie of Sule Skerry, a mortal woman is wedded to a seal husband’ (Katherine Briggs, The Fairies in Tradition and Literature, p. 52).

Keep sending us your selkie books!