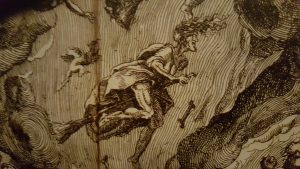 I have been blogging quite a lot lately about witches and magic books. I wrote on the Renaissance magician John Dee in ‘It’s a kind of Magic’ and offered some critical thoughts on ‘Sexualising the Witch’ in response to recent scholarship. Prior to this I wrote a number of confessional posts about my formative reading involving witch poetry and spell books (inspired by an anthology of witches that I was given age 12). You can read about these in ‘How Did I Choose Me My Witch Craft Kin’ and ‘I Saw Three Witches.’ I also started to map the rise of the sympathetic witch in the twentieth century as a possible research strand. When I found myself in the north on a fleeting visit therefore it was imperative that I visited  the exhibition ‘Magic, Witches and Devils in the Early Modern Period’, curated by Jennifer Spinks and Sasha Handley. 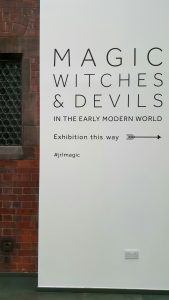 The John Ryland’s Library is a place of terror and wonder where knowledge and imagination correspond. It is also a little like Hogwarts (in fact it is probably the most splendid gothic building I have ever visited), the perfect home for magic.  I made sure I had a good look at the gargoyles and mythical creatures hidden in the gothic passageways before going in to the look at the exhibition show cases. 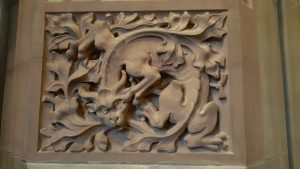 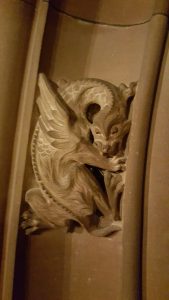 I have become increasingly interested in visual images of the witch and despite prominent and influential figures such as John Dee the stereotypical witch is of course female. The exhibition catalogue tells us that:

The majority of convicted witches in early modern Europe were women, and two female stereotypes became particularly powerful: the alluring young woman, and the dried-up old ‘hag’. Regardless of age, female witches were believed to be in sexual thrall to the Devil, who was the source of their power. Yet this power came at a price and revealed the Devil’s deceptiveness: witches were given gold that turned to dung, or seduced by handsome men who later revealed their true, diabolical form.

Visual images are important in establishing these stereotypes  and I learned that:

The story of the witch of Berkeley was illustrated for the first time in the 1493 Nuremberg Chronicle, told as part of a historical narrative in a Christian framework. The half-naked witch, wrapped in her shroud, is shown claimed by the Devil after her death as payment for the magical powers given to her in life.

This certainly whetted my appetite and one of my favourite images (and titles) was Albrecht Durer ‘Witch Flying Backwards on a Goat’ (Nuremberg, 1500) pictured below. I also enjoyed gazing at Jan Ziamko’s ‘A Witches Sabbath’ (which appeared in a text in Paris in 1613) and images of witches and devils carrying off human children, which were very evocative of anxieties around demons and demonic women. 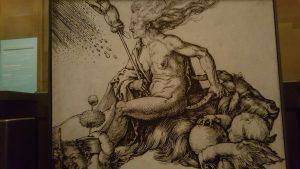 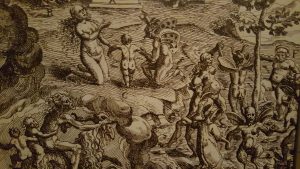 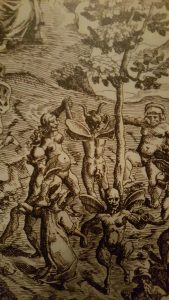 My favourite exhibit however was a book by the herbalist and botanist Conrad Gesner, De Remedis Sectretis (France, 1555), with handwritten annotations by no other than John Dee (yes, really). This combined my research on OGOM and botany to mesmerising effect. The page was open on a remedy for eternal youth, consisting of herbs, donkey’s milk, cinnamon and eggs with a delightful drawing of the ‘cinnamon girl’ by Dee. I felt very privileged to have seen this and it is one of the many wonders you will encounter during the exhibition. 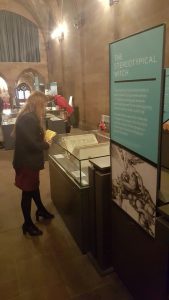 I left with some wonderful source material and a copy of the Penguin book of Witches to read on the journey home.  If you have not caught this show you have until 21st August 2016. I would have liked the exhibition to break out of the Early Modern Period and perhaps gesture towards more sympathetic portraits of witches in the twentieth century but the fact that it didn’t do this leaves lots of space for my own research.  I will post something on this shortly and write on some further images of European witchcraft that I want to share.  If you are travelling northwards to Manchester in the near future do take a detour to the John Rylands Library and  don’t leave home without your broomstick!