Fairy Tale Hybridity: What Kind of Animal is Beast in ‘Beauty and the Beast’?

‘Beauty and the Beast’ belongs to the Animal Groom cycle of fairy tales alongside ‘The Frog King’ and ‘Cupid and Psyche’.  I have always been intrigued by what kind of animal Beast is in this tale.  In his twenty first-century manifestation he has ram’s horns, a lion’s mane and a wolfish/bearish face: 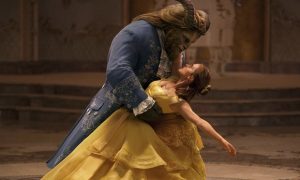 I am reliably informed that the 1991 Disney animation figures Beast as a buffalo in a reference to Native American culture and the fact there is an animal bridegroom folktale called ‘The Piqued Buffalo Wife’ from that part of the world. 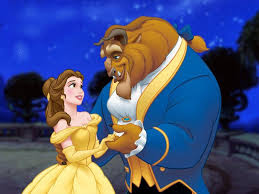 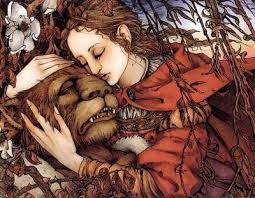 and @BillBloodyHughe reminded me that in the French 1740 original by Madame de Villeneuve, the Beast has scales and an elephant’s trunk: 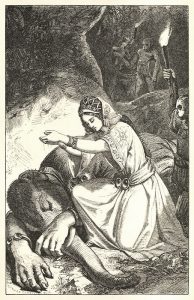 A 1765 version of this tale represents the beast as slightly more demonic looking resembling a black ram: 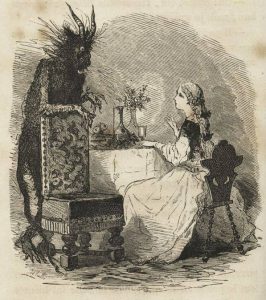 In fact he has an uncanny resemblance to Black Phillip from Robert Egger’s The Witch (2015)! He is more elegant and a warthog in many of the illustrations of the tale however, such as the one below: 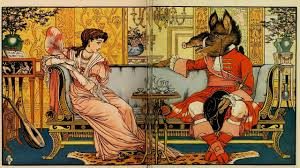 In Andrew Lang’s retelling of La Belle et la Bête par Madame de Villeneuve. Beast is shown with human hands and an elephant’s trunk objecting to the merchant’s stealing of a rose from his garden (1889). 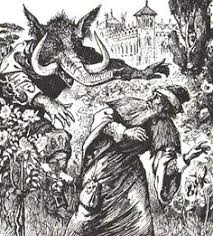 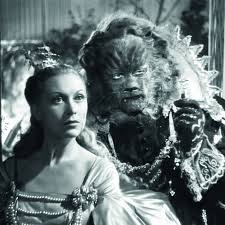 There are now versions which retell the tale from Beast’s point of view (Donna Jo Napoli, Beast (2004); Alex Flinn, Beastly (2007)). Robin McKinley’s Beauty (1978) is studied on OGOM’s Generation Dead: YA Fiction and the Gothic module which I developed and here Beast is wonderfully hybrid. He has a ‘heavy brown mane that falls to his shoulders’ (145) and is more civilised than savage, shown in his liking for fine food and wine (though he cannot wield a knife and fork because of his paws/claws!). He also has an extensive library full of books which haven’t been written yet (lovely trope) though he has trouble turning the pages (those paws again).

Beauty adds further mystery to the appearance of the Beast when she remarks on his human eyes and the fact that he is not ‘bearish’ at all. In fact she compares him to Yggdrasil, an immense mythical tree that connects the nine worlds in Norse cosmology. This is a good reason  to read Neil Gaiman’s Norse Mythology (which I know Kaja has been enjoying but I have not got round to reading it yet alas).

“I realised that what made his gaze so awful was that his eyes were human. We looked at each other a moment. Not bearish at all, I decided. Not like anything else I could put a name to either. If Yggdrasil had been given an animal’s shape, it might have looked like the beast” (Robin McKinley’s Beauty, p. 131)

So the Beast is compared to an animal/human tree in McKinley. Hybridity is debated widely in the vegetable world too. Taxonomy has been something that has always been a part of my research because of my botanical interests. Hybrid blooms known as ‘exotics’ (such as parrot tulips or double hyacinths) tend to be considered ‘monstrous’ because they do not produce good seed, are not pure stock, and because ‘nature’ can no longer be found among them. Animal hybrids such as the mule are also thought to be debased and are infertile. Beast is one of only a few positive images of hybridity in the popular imagination, though of course the tale is ambiguous and he has to become fully human for the union to be legalised in marriage. I posted on hybridity and the Wellcome Institute’s Making Nature Exhibition recently. This is a very intelligent exploration of taxonomy including faux classification and animal/human hybrids such as Beast so do try to catch the show.

The furore surrounding the new Disney version seems to be focussed on Belle or Beauty rather than Beast,  perhaps due to the celebrity nature of its star Emma Watson, whereas the Disney animation previously gave us a Beast-centred narrative, devoted almost exclusively to the development or regeneration of the unregenerate male figure. Further discussions of the Disney version can be found in Jack Zipes ‘Breaking the Disney Spell’ in Tatar ed. The Classic Fairy Tales (New York: W.W. Norton, 1999), pp. 332-352.

If you have seen Beauty and the Beast you might be interested in the following articles from The Guardian ‘Beauty and the Beast: Dark History of a Literary Fairy Tale’ and ‘The Beauty and the Beast in La La Land’ on the various musical versions. It will be hard for any adaptation to out do Cocteau’s for me. It was the first to fully bring out the unsettling Gothic elements in the tale. I’d like to see a version where the animal and human are reversed with a wolf as Beauty and a human Beast. Of course in Carter’s version, ‘The Tiger’s Bride’, which is the most subversive, instead of Beast becoming human, Beauty herself transforms and becomes furred …absolute genius! 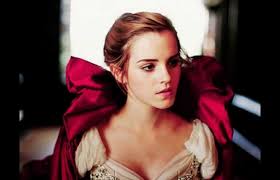 6 Responses to Fairy Tale Hybridity: What Kind of Animal is Beast in ‘Beauty and the Beast’?