Followers of OGOM will know that we have been at the forefront of debates around the cultural representation of the wolf since the Company of Wolves Conference in 2015. We went on to collaborate more fully with the UK Wolf  Conservation Trust and stage our Being Human event ‘Redeeming the Wolf‘ in 2017.

If we needed more evidence that wolves still need to redeemed here it is: Harmless or Vicious Hunter: the Uneasy Return of Europe’s Wolves. Marcus Sedgwick, friend of OGOM, and writer of many fine books which represent wolves and wolf children, has alerted me to the above article which appeared today in The Guardian.  It appears to be influenced by the work we have done in the media forging a relationship between the big bad wolf of fairy tale and the wolf’s troubled return (‘Little Red Riding Hood Hampers Wolf Debate Says Academic’).

I despair at the fatuous and androcentric way humans continue to control the planet and its inhabitants, signing the death warrant of thousands of animals and their young because they have an irrational fear of them, or because they might ocasionally pose a threat to livestock preserved for humans only to kill and devour. Wolves continue to be slaughtered and persecuted all over Europe whilst they struggle to return. Such wolves are only doing what wolves do, but murdering humans are far from being redeemed. I am continuing to research and popularise benevolent representations of the wolf in the hope that we can create a new narrative for the twenty-first century. 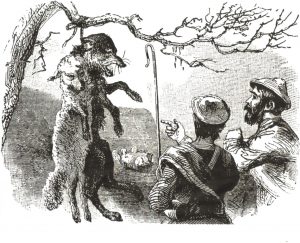