Photographs of Children Raised by Wolves

The photographer Julia Fullerton Batten has created a series of images of wolf children, or children supposedly raised by animals. In Feral: The Children Raised by Wolves, Fiona Macdonald reports that these pictures have a ‘dreamlike, fairy-tale quality’, and yet the lives they portray are real. There are two different scenarios – one where the children involuntarily end up in the forest, and another where they are so neglected and abused that they voluntarily seek comfort from animals. I find that the images privilege the human rather than the animal side and yet in doing so the children seem strangely at odds with their environment. They are often pictured crouching and scavenging for food and yet they appear pristine and often clothed. The project claims to raise awareness of child cruelty because in many cases the human parents have allowed the children to become feral or have abandoned them in forests much like a modern day story of Hansel and Gretel.

I am currently writing about animal-parented children in literature for the OGOM Company of Wolves book, following my plenary talk at the conference: ‘This is what it sounds like when wolves cry’; Wolf Children, Storytelling and the State of Nature’ . You can see the full conference programme here.Wolf children appear in many cultures throughout history and the myth can be traced back to the story of Romulus and Remus who were suckled by a She wolf, according to the descriptions of the creation of Rome (in Livy, History of Rome circa. 29 BC). Modern day readers are more familiar with them through the character of Mowgli in Kipling’s Jungle Book (1894), though there are many ‘real life’ accounts preceding this in the Enlightenment period and in British Romanticism, where writers responded to Rousseau’s ideas regarding ‘the state of nature’ and ‘the noble savage’.

Below are two of Batten’s contemporary images representing the stories of twentieth and twenty-first century wolf children. They show that the myth of wolf children continues to fascinate down the centuries. 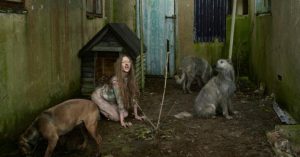 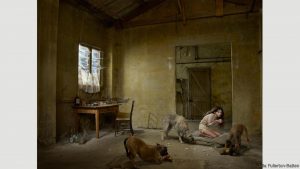 Associate Professor of Research, School of Humanities, University of Hertfordshire Co-convenor OGOM Project
View all posts by Sam George →
This entry was posted in OGOM: The Company of Wolves, Resources and tagged feral children, wolf children, Wolves. Bookmark the permalink.