Company of Wolves: one of the most talked about social justice issues of the day

Recent events suggest that Animal Rights is quickly becoming one of the most talked about social justice issues of the twenty-first century. Garry Marvin, Professor of Human and Animal Studies at the University of Roehampton will be opening up some of these issues for debate at the Company of Wolves Conference in September. Prof Marvin will be giving a keynote address on ‘Cultural Images of the Wolf and the Wolves’ Re-emergence in Europe’. Once again OGOM seems to have its finger on the pulse of contemporary society as these issues are red hot just now.

Those of you who are following the Cecil the Lion story will be know that Cecil’s death has sparked outrage worldwide, as people everywhere lament the damage that humans continue to inflict on the populations of not just lions, but the planet’s many endangered creatures. On Saturday night, the Empire State Building served as a timely, sky-high reminder of this devastating impact, as images and videos of threatened animals were projected onto the façade of the iconic New York City skyscraper. Cecil was one of the animals featured. 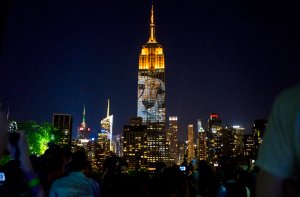 Large images of endangered species are projected on the south facade of The Empire State Building, Saturday, Aug. 1, 2015, in New York. The large scale projections are in part inspired by and produced by the filmmakers of an upcoming documentary called “Racing Extinction.” (AP Photo/Craig Ruttle)

You can read about this story in Huffington Post

Looking forward to debating some of these issues at the conference.

Associate Professor of Research, School of Humanities, University of Hertfordshire Co-convenor OGOM Project
View all posts by Sam George →
This entry was posted in Conferences, OGOM: The Company of Wolves and tagged Animals, Werewolves, Wolves. Bookmark the permalink.

5 Responses to Company of Wolves: one of the most talked about social justice issues of the day