Vampire at the Crossroads

The intersection of roads and pathways are dark, dangerous, uncanny places, offering  two or more options at once. According to ancient superstitions crossroads are unhallowed ground, haunted by vampires, demons, witches and trolls. Malevolent spirits who like to lead travellers astray like Will’o’the Wisps (ignis fatuus) also hover mischievously around crossroads.

Crossroads are most definitely not the place to be at midnight when vampires rise from their graves. According to some superstitions they take their shrouds with them and station themselves at crossroads looking for victims. In Romanian lore, people who are destined to become vampires after death send their souls out of their bodies at night to wander at crossroads with reanimated corpses (Murgoci). 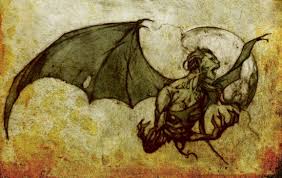 Crossroads also have a role in various funeral and burial customs, which keep the dead from returning to attack the living. An old Welsh custom calls for corpses to be laid down at every crossroads and prayed over as they are carried from the graveyard, in order to protect the dead from evil spirits and prevent the corpse from becoming a revenent itself (Guiley).

In many countries the victims of a murder or suicide are buried at crossroads. Until 1823 English law required that suicides be buried in the highway, crossroads were chosen and the corpse was often staked (Simpson and Roud). This was a ritual of public disgrace to deter others, and a sign that there was a possibility of the suicide returning as a vampire. Suicides who had sinned by taking their own lives were not permitted to be buried in consecrated ground in churchyards or cemeteries. Below is the grave of Kitty Jay an eighteenth-century orphan who sadly took her own life after falling pregnant to the local farmer’s son. She was buried at the intersection of a road and a moorland track in Dartmoor. A hooded figure is often seen kneeling at the side of the grave.  Kitty’s Grave was also the inspiration for a story by John Galsworthy called ‘The Apple Tree’ which was written in 1916. Thanks to Katie Taylor for reminding of this unsettling crossroads grave. 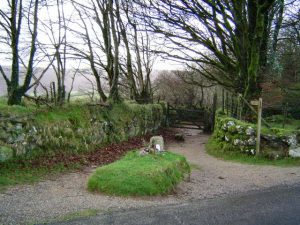 Murder victims were also taken to crossroads because it was feared their spirits would be restless and troubled and would return to take revenge on the living. Burial at a crossroads would supposedly keep them at peace. 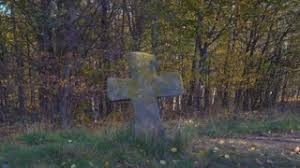 Superstitions are often contradictory and so it is with the supernatural nature of crossroads. Vampires are believed to stalk their victims at crossroads, their place of power. Conversely, crossroads are said to neutralise malevolent beings and render them powerless. According to Eastern European lore, vampires become confused at crossroads, losing their prey.  The OGOLJEN is a Czech vampire that must be buried at crossroads in order to prevent in from continually returning. Earth from its tomb must be placed in its navel (Guiley). In Romanian peasant lore when a vampire first appears, it must be ordered by a family member to go to the village crossroads – ‘Go O Demonic power, the soul of the vampire to the crossroads, so that the wolves may tear you to pieces, there is no place here for you among Christian souls’ (Guiley).  This incantation is thought to banish the vampire! 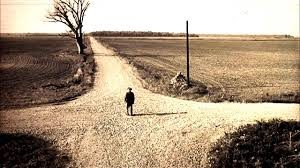 Superstitions around crossroads have inspired music, poetry and film. Many of you will know Robert Johnson’s Crossroad Blues:

And since I started researching the lore of the crossroad Victoria Carney has responded with her very own poem ‘Vampire Sojourn’ which she posted for me on Twitter. 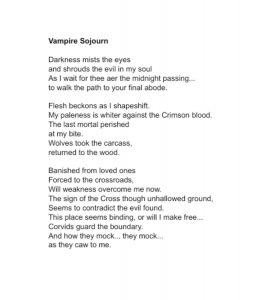 In keeping with the folklore, the vampire has a very ambiguous relationship to the crossroads in this poem (thank you so much for this @DescendingAnge5). If others are reading this and are aware of lore relating to crossroads do let me know. In the meantime beware the unsettled intersections of roads and pathways, particularly around Midnight.

2 Responses to Vampire at the Crossroads