OGOM at the Being Human Festival 2017

We are proud to announce that OGOM has been successful in its bid to participate in the Being Human Festival 2017. Our event is detailed below:

Hunted to extinction in Britain, wolves haunt the human imagination. This event engages audiences with the persecution, loss and reintroduction of the wolf. A short film introduced by the UK Wolf Trust and a series of research-led talks will interrogate contrasting representations of the wolf, before the audience debate the possibility of redeeming and re-wilding this much maligned ‘beast’.

The illustrated talks are developed from innovative chapters in the OGOM Centre’s forthcoming Company of Wolves book and  challenge humankind’s perception of the Big, Bad Wolf. Topics include lupophobia or humankind’s hatred of the wolf, the myth of children raised by wolves, the legacy of Beauty and the Beast, the monstrous werewolf, the  last wolf, and the extinction and re-wilding of the wolf in the UK.

This activity fits the festival theme of ‘Lost and Found’. As the wolf was eradicated in  Britain it is currently a ‘lost’ species. The idea of the metaphorical ‘wolf hunt’ is essentially a game involving lost and found.  The event also interrogates ‘Being Human’ through animal/human relations, i.e. the negative wolf which we hope to ‘lose’ and the redeemed wolf which we hope to ‘find’.  This event builds on the success of the OGOM research Centre and  our Company of Wolves project, which saw the largest conference in the UK on wolves, werewolves and feral children. We received unprecedented attention in the local, international and global media (10K shares for coverage in The Independent for example, live coverage on the BBC, stories in Russia Today and the South China Post, etc. and the acknowledgement of a first for a UK Academy in the THES).

Put this in your diary. More details soon! 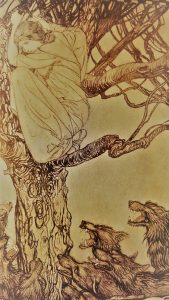