Vampire Theatricals: An Exploration of Vampires on the Stage 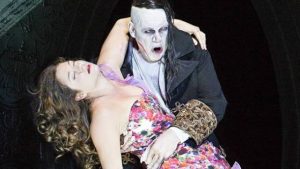 Last week on ‘Reading the Vampire’ we explored ‘The Vampire Theatre: Stage Plays and Victorian Melodrama’ our workshop texts were J. R. Planché, The Vampyre, or Bride of the Isles (1820); William Thomas Moncrieff, The Spectre Bridegroom (1821); George Blink, The Vampire Bride; or, Tenant of the Tomb (1834), in Beyond the Count: The Literary Vampire of the Eighteenth and Nineteenth Centuries, ed. by Margo Collins (Bathory Gate Press, 2015); Johann Ludwig Tieck, ‘Wake Not the Dead’ (trans 1823) available on Project Gutenberg

In the workshop we focussed on the representation of the vampire in the theatre, investigating the influence of Polidori, and the vampire in Victorian melodrama prior to the Count’s appearance with all his theatrical tropes in Stoker’s Dracula. The female vampire made her first appearance  in the shape of Brunhilda, the bad wife and bloodsucking serpent or Lamia figure, in Blink’s ‘The Vampire Bride’ (1834). This   bloodcurdling theatrical is inspired by Tieck’s ‘Wake Not the Dead’ (translated 1823). The following critical material was discussed in relation to the plays: Katie Harse, ‘“Melodrama Hath Charms”: Planché’s Theatrical Domestication of Polidori’s “The Vampyre”’, Journal of Dracula Studies, 3 (2001), 3-7; Ronald Macfarlane, ‘The Vampire on Stage’, Comparative Drama, 21 (1987), 19-33; Roxana Stuart, Stage Blood: Vampires of the Nineteenth-Century Stage (Bowling Green, OH, Bowling Green University Press, 1994)

We were joined by my PhD student  Matt Beresford, who is currently writing a chapter on Polidori’s legacy in these plays for his thesis. I was thrilled following our lively discussions to discover that a production of Marschner’s 1827 ‘Der Vampyr’, the first Gothic grand opera, inspired by the Romantic/Byronic vampire was available on BBC Radio 3. ‘The Vampire’, was recorded in Geneva last year and is presented by Katie Derham.

2 Responses to Vampire Theatricals: An Exploration of Vampires on the Stage