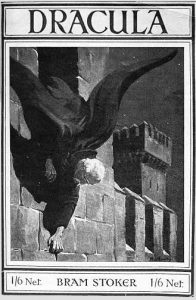 I spent Tuesday at Broadcasting House recording ‘The Forum’ on Dracula. I was one of three guests representing Dracula scholars from around the world for an international audience for the BBC World Service. Joining me from Canada was Dacre Stoker, Great Grand Nephew of Bram Stoker, and representing Irish gothic and Dracula’s forays into film, was Dr Sorcha Ní Fhlainn. I’ve blogged previously about Recording Dracula and getting involved with this project and revealed my hesitation regarding my radio voice but never say never because here I am reporting on my activities on the show!  I approached the iconic building with some trepidation and was unprepared for the lengthy security checks at the Beeb but on meeting Fiona, my contact and the editor, I was reassured. She quickly introduced me to the show’s presenter Bridget Kendall. Bridget is a complete professional and very straight talking. She explained that we would record the show, which is in two halves, in one take with Dacre and Sorcha contributing from different studios. The script had been fleshed out so that the producers had a good idea of who would come in on which question and what direction the discussion would take.

We began with some rather quirky questions about world myths concerning vampires and I spoke about vampires as ‘citizens of the world’, who know no temporal or geographical boundaries.  Sitting in the studio was quite daunting because you can see the technicians and the show’s producer watching you through the glass. It also takes some time to adjust to the headphones and the comments coming down them from the other contributors (who are not live in the studio). You get a very good sense of the insight and editing skills required to seamlessly stitch the material from such programmes together because they seem so completely effortless when broadcast. The team at the Beeb are highly skilled I found. I could intercept quite easily once in full swing and we had some spooky clips from Christopher Lee to help us on our way. There were some hairy moments though….such as this one…

BRIDGET. What about the suggestion that it’s a gay novel?  Dracula at one point says of Jonathan Harker “this man belongs to me.”

SAM. Yes, the notebooks show that this line was the starting point for the whole novel……Stoker had some sort of homo-erotic dream and woke up repeating the words ‘this man belongs to me’ he went on to write this into the novel and it shows that Dracula has male victims too – he is bi-sexual. At Castle Dracula the vampire has marked Harker out as his victim – the vampire brides are warned off when they try to attack the man, Dracula is claiming ownership of Harker himself. We should remember that homosexuality is illegal at this time and Oscar Wilde had just been imprisoned for gross indecency (his trial in 1895 had terrified Stoker – he knew him of course) so this may be a coded reference to male same sex desire in the novel. I don’t want to speculate too much, but Stoker’s death certificate says he died of ‘exhaustion’ but some claim this is a euphemism for syphilis….by all accounts he was fairly promiscuous!

Ooh er…this was a bit tricky to talk about with Dacre listening in as I didn’t know his opinion on this!  Overall though it was very enjoyable and it did make me think about engaging with a non specialist audience and one that is made up of listeners from around the world. Any references need to be explained so there are little asides or interceptions when say Wilde or Darwin are mentioned etc so there is some clarity and it is inclusive. I really hope listeners enjoy the finished programme. I’m beyond excited to see how it all fits together.

There are several broadcasts depending on where in the world you are. But for UK listeners, the first programme goes out at 19.06 on Saturday 16th September.  There are repeats also, which look to be on the following Monday and Tuesday.

Anyone outside the UK should go to http://www.bbc.co.uk/worldserviceradio/help/faq#faq for broadcast times and how to listen in your location.

The programme will also be available from the following Monday online on its own webpage, which you can find via the Forum homepage

They will be publicising the programme via the Forum Facebook page too.

Persons of small courage and weak nerves should confine their reading of these gruesome pages strictly to the hours between dawn and sunset…. 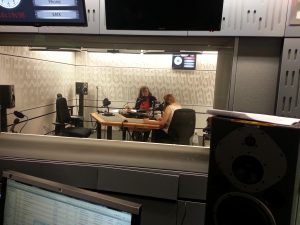