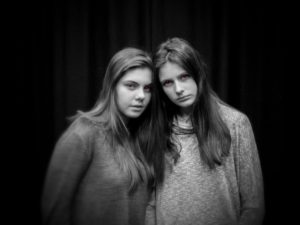 I was at the Abbey Theatre in St Albans last week with a friend to see a play entitled  ‘A Vampire Story’ written by Moira Buffini and directed by Phillip Reardon.  Buffini has collaborated with Damon Albarn and this play was adapted as a screen play for Neil Jordan’s Byzantium in 2013.

The rights to the play belong to Samuel French Ltd, a company I remember well from my bookselling days at Gower Street and beyond. The theatre is a short walk through the park from my house so it was easy to attend and the subject matter is very appropriate to the Open Graves, Open Minds project. The fact that the play was going to be acted by teens made me even more keen to see it as it seemed pertinent to the level 6 module I have developed at the University of Hertfordshire (Generation Dead: Young Adult fiction and the Gothic  and I liked the theme of vampirism and adolescence. The production was in the studio adjacent to the main theatre and we were pleased to see there was a full house and a very mixed audience.

The play begins with a memoir being read in a nineteenth-century setting then flips to a train journey in which two young women are travelling to a new town. The youngest, a disenchanted teen, will enrol in drama class in an attempt to assimilate and detract attention from her true identity. We learn that the older girl Claire (Tasha O’Donnell), has rescued the younger girl Ella (Grace Carson), from an orphanage, casting her in a maternal role, though in reality they are more like sisters, close in age.

At the drama workshop in the next scene Ella undergoes a truth exercise and alienates her classmates by self-identifying as a vampire, and that is not all, she has ‘false’ memories of a life of abuse in a nineteenth-century workhouse. From this point onwards she is ‘the other’ but she finds solace in another outsider, a troubled young man named Frank (Frank N. Stine, in fact, pun intended). Frank is the victim of controlling and overbearing parents and the traits of these damaged adolescents begin to sound a lot like vampirism. Ella‘s refusal to eat at Frank’s birthday supper leaves her open to speculations of anorexia, rather than vampirism, but there is enough ambiguity to keep the audience guessing. Frank struggles to find a voice that others can understand, though he is something of a young philosopher. We might see his struggle as a metaphor for the autism spectrum, a different way of engaging with the world. The two ‘geeks’ form a bond but the popular kids seek revenge on them for ‘weirding out’ the drama class and there is the suggestion of hate crime and bullying.

At this point we return to the orphanage where a young girl is made a physical resource by a visiting Lord and the past intrudes on the present in true gothic fashion.  The abuser Lord Ruthven seeks revenge on the girl because her mother has betrayed his dark secret. The name of Ruthven will signify to vampire fans of any age that the play is now in an intertextual relationship with Byron’s vampire fragment (published by Polidori as ‘The Vampyre’ in 1819). Lord Ruthven is the archetype of the Romantic Byronic vampire, something of a lady killer. As the teens plan their escape in the present we are back in the orphanage/asylum in the nineteenth century where the girl recounts her history in the presence of a doctor. Such tropes suggest this may have been an elaborate charade or a crazy day dream but there is something darker at the play’s heart and we all ‘fall victim to some curious disquiet’ in homage to the original vampire story.

This is a thoughtful and well-acted production, one written in a contemporary gothic mode. There is sympathy for the ‘monster’ and the freaks and geeks are no longer pushed to the margins in fact they become the main protagonists (Catherine Spooner would approve). Auerbach famously says that ‘each age embraces the vampire it needs’ and the twenty-first century sees those who are marginalised as metaphorical vampires, their otherness at odds with the society in which they find themselves. Like Ella they perpetually re-enact the role of the repressed, caught up in an eternal return.

The teenage actors understand this and they excel in telling their story, particularly Joe Wackett playing Frank, and the boy who is the drunken Lord (and doubles as a mouthy teen), Eloise Wathen. If anything this shows that exciting things can happen on your doorstep and you don’t have to pay a fortune to see good drama. We certainly had lots to talk about on the way home.

Thanks to everyone involved at the Abbey Theatre..and now where’s my Byron and Polidori..time for a re-read…I’ll be checking out Byzantium on DVD too.