Posted on 15th December 2015 by firekrank 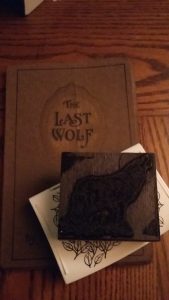 In the spirit of Christmas and the festive season, I just wanted to post the very thoughtful gift I received from my colleague for Secret Santa. For those who can not appreciate my somewhat dubious camera skills it is a wolf-shaped stamp and an edition of The Last Wolf: A Story of England in the Fourteenth Century (1900) by Mrs Jerome Mercier.

The Preface reads: ‘This story of the slaying of the last wolf, well known in the districts of Cartmel and Furness, pretty in itself, is an emblem of the change which was coming over England in the thirteenth and fourteenth centuries – brute force giving way to civilization, though, alas! that has its evils too. The effort of these simple pages is to picture the transition, from a study made on the spot’. My appetite is certainly whetted!

This entry was posted in Fun stuff and tagged Wolves. Bookmark the permalink.