Will the Blood Moon Come Too Soon?

Serpents, dragons, jaguars, bats and wolves are all associated with the eclipse, according the Smithsonian Magazine’s What Folklore Tells us About the Eclipse.  You have probably heard of the myth of the wolf who swallows the sun or moon causing an eclipse or the end of the world. In Germanic tradition it is Mani who guides the moon. When the world is being destroyed (Ragnarὂk), the moon is swallowed by a wolf. 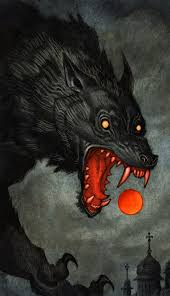 We have always celebrated the eclipse here at OGOM. Kaja has previously pondered the big question that all Goths will be asking on Friday 27th July What Happens to Werewolves in a Solar Eclipse? 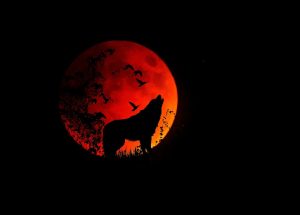 The other question on everybody’s lips will be What is a Blood Moon? Apparently, total lunar eclipse happens when the Sun, Earth and the Moon perfectly line up. The most spectacular part about a total lunar eclipse is that when the moon is fully in Earth’s shadow it turns red. This phenomenon has ominously become known as ‘The Blood Moon’. 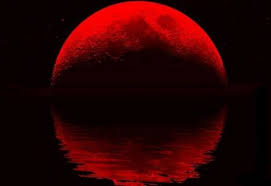 It is easy to get to grips with the science. The red colour apparently happens because sunlight is deflected through Earth’s atmosphere. The process is called refraction and it bends red light from the sun like a lens into the space behind Earth – and so on to the surface of the eclipsed moon. And here’s  something from one of my colleagues at the University of Hertfordshire,  Dr Sam Rolfe, who researches Astrophysics and Astronomy. She has written a special eclipse blog entitled Coming Soon: Total Eclipse of the Moon

What is more intriguing for OGOMERs perhaps is the Terrifying History of Blood Moons. There  is a lot of folklore. No good will come of a child who is born into a red moon! In Romania there is an eclipse demon the VARCOLAC or VIRCOLAC.  It’s an evil vampiric, wolfish, spirit that eats the sun and moon, causing the eclipse.  Some believe these creatures to be the souls of unbaptised children, who are cursed (Rosemary Guiley).  Supersitions about the eclipse are well documented by scholars such as Agnes Murgoci and Jan. L. Perkowski, who specialise in Slavic and East European vampire lore. 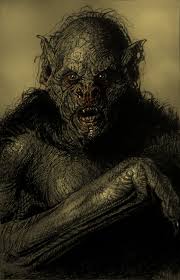 For me the eclipse will always be linked to the vampire, not the wolf or werewolf. The vampire is a creature of darkness who loves the shadow and the shade. For this reason I was delighted to learn that Bonnie Tyler’s ‘Total Eclipse of the Heart’ is a love song for a vampire and was originally named ‘Vampires in Love’.

Love song for A Vampire: A Total Eclipse of the Heart is the full story of my love affair with these eerie eclipse lyrics!

Remember though Beware of the Big Bad Blood Moon!

5 Responses to Will the Blood Moon Come Too Soon?