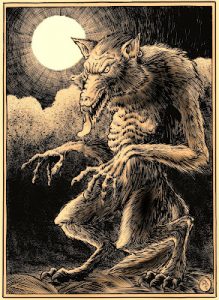 Sabine Baring-Gould claims that ‘English folklore is singularly barren of werewolf stories , the reason being that wolves had been extirpated from England under the Anglo Saxon kings, and therefore ceased to be the object of dread to the people’ (Book of Werewolves, 1867, p. 77). This is what makes the sightings of the Hull werewolf, known as ‘Old Stinker’, in the last few days all the more intriguing. OGOM has been busily reporting on coverage of this contemporary phenomena (see for example ‘Werewolf Sightings in Yorkshire’  and ‘Ancient Werewolf Known as ‘Old Stinker’ Sparks Folk Panic in the UK‘). In literature accounts of werewolfism or lycanthropy can be traced back to the epic of Gilgamesh in 1200 (whereas wolf fables begin with Aesop’s ‘The Boy Who Cried Wolf ‘ in 620- 520 BC). Virgil’s Eclogues are thought to be the first account of voluntary werewolfism (42-39 BC) but lycanthropy is more commonly seen as ‘a curse’ or a sign of bestiality, or at worst of cannibalism. Those who were executed in werewolf trials in the middle ages were believed to have a taste for human flesh. With the advent of psychoanalysis werewolfism came to more commonly represent the ‘beast within’ or everything animal that we have repressed in terms of our human nature.  The werewolf is the spectre brother or shadow self of the wolf and the history of werewolfism can easily be juxtaposed with humankind’s treatment of wolves. The much talked about case of Peter Stumpf, who was executed for being a werewolf in 1589, corresponds with the extinction of the wolf in England in the 1500s (although the extinction of wolves across Europe did not occur until 1800s). Wolves held out in Ireland until the 1700s (though they were extinct in Scotland by the late 1600s). These dates are well documented by Garry Marvin and others. In 2015 OGOM reported on attempts to re-wild the wolf in the UK and elsewhere at the Company of Wolves conference. We began to question what would happen if wolves returned to our forests and this was prominent in the many media reports of the conference in The Independent, The Guardian and elsewhere.
In the 1880s British traveller Emily Gerard accounted for the Romanian belief in werewolves by equating it with fear of the wolf, ‘as long as the flesh and blood wolf continues to haunt the Transylvanian forests, so long will his spectre brother survive in the minds of the people’ (The Land Beyond the Forest, 1888). The emergence of the Hull werewolf ‘Old Stinker’ in the last few days has reopened debates about the werewolf’s relationship to the ‘flesh and blood wolf’. At OGOM we often get asked what causes belief in werewolfism (and vampirism) and what is most pertinent and magical about this latest folk panic is that ‘Old Stinker’ is thought to inhabit a landscape which saw some of the last wolves in England. He represents then, not our belief in him as a supernatural shapeshifter, but our collective guilt at the extinction of an entire indigenous species of wolf. Far from dismissing the myth, my instincts are to embrace it and see it as a manifestation of our cultural memory around wolves. Contrary to the assertions of Gerard, the ‘Old Stinker’ story tells us that belief in werewolves lives on beyond the actual lives of the wolves who were thought to inspire them. Rather than being dismissed as a rather fishy tale, ‘Old Stinker’, can inspire the wolf warrior in all of us and allow us to lament the last wolves who ran free in English forests. ‘Old Stinker’ is far from being a curse, in fact he is a gift;  he can reawaken the memory of what humans did to wolves, raise awareness of re-wilding debates, and redeem the big bad wolf that filled our childhood nightmares, reminding us that it is often humans, not wolves or the supernatural, that we should be afraid of. 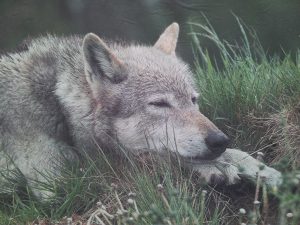