On Saturday my partner and I adopted two kittens from Mitcham Cats Protection league. On our arrival we were asked if we had any preference to the appearance of the cats we were going to adopt. Our answer was no. The next question was: Were we okay with black c

ats? My reaction was a little non-plussed. I’m from a cat family and I’ve grown up around cats and usually black cats. (There was Fatty, Fatboy aka Fatty Jnr – and the reason why you don’t ask four year olds to name cats, and currently my parents have Adam and Acorn). The question piqued my interest: both my ‘Give me all the kitties, please’ and academic interest. I’d heard this theory before but wasn’t convinced. It seemed ridiculous. (Though I had noticed that there were plenty of black kittens listed on the website). So I asked whether it was true then that black cats weren’t adopted as often? The answer was yes and to prove it I found the postcard pictured above encouraging people to adopt a black cat.

Of course my reaction to this, other than to immediately adopt two black kittens, was to head home for research. It would appear from multiple sources that it does seem to be the case that black cats are adopted less regularly. (You can read about it here, here and here). However I also read one source that suggested though it appears to be the case that black cats (and dogs) are adopted less regularly the numbers don’t seem to add up and it may simply be a case of this myth proving itself. Thus animal shelters read the pattern onto random cases rather than reviewing all the information. Yet even if it is simply that people perceive black cats as being less likely as adopted, reading that pattern onto the situation must be based on a certain idea about what black cats symbolise.

The reasons put forth about why black cats are not adopted are varied. Some people suggest that it is because they do not show up as well in pictures so aren’t as tempting to people viewing them on websites. However most people agree that the reason is the superstitions associated with black cats. In particular the idea that black cats are omens of ill fortune and associated with witches. It is hard to verify just how old the relationship between witchcraft and cats is. Certainly there are accounts of cats being counted amongst familiars in witchcraft trials during the sixteenth and seventeenth centuries. However as with most aspects of folklore the definitive relationship – in this case between black cats and witchcraft – seems to come after the historical accounts. Moreover this relationship is often consolidated in more recent popular culture. (Think Bram Stoker’s ‘The Squaw’ (1914) or, more recently, Salem in Sabrina the Teenage Witch (1996-2003) and Thackery in Hocus Pocus (1993)).

This myth about the black cat has an even more pernicious embodiment in contemporary society however: the belief that black cats are at risk of being sacrificed on Halloween. Whilst this has been debunked, it is still the case that many animal shelters will not allow people to adopt black cats in the run up to Halloween. (As pointed out this is partially because people adopt them as ‘props’ for their witch costume). Though black cats are not being sacrificed by satanic cults for Samhain, there have been disturbing accounts of cats being killed. Most recently there were a large number of cats decapitated in Croydon. This leads me to my next thought: it’s not just black cats but cats in general that invoke an unpleasant reaction.

Cats have a reputation for being unemotional, disloyal, hard to read, indecisive, cold and unloving. They are deemed to be not as domesticated as dogs. The tales of cats sitting by their master’s graves are few and far between. Humans have tendency to create ‘types’ and seek patterns in the animals with who we share our lives. The cat is a symbol of independence. It also has a certain stand-offishness. In one of my MA essays I considered this perception of cats in particular in relation to philosophers. My research was as follows:

“There is an accepted truth about cats that they are somehow independent; the incarceration of big cats within zoos is often the one which causes the most perturbation since it is, apparently, universally acknowledged that big cats need massive areas in which to roam. The image of the big cat caught behind bars inspired Ted Hughes’ The Jaguar and Rainer Maria Rilke’s The Panther; though these poems are not necessarily concerned with the reality of ‘catness’, they relate to the symbol of the big cat and tie in with the clichéd idea that surrounds cats.[1] Hughes’ jaguar becomes a totem of shamanic power that is not limited by physical entrapment whereas Rilke’s panther suggests the prisoner, broken by years of having his freedom denied. Nor is the importance of the cat limited to artistic interactions; they have long been seen as the philosopher’s animal. Both Derrida and Montaigne wrote about the manner in which their pet cats questioned the concept of what it was to be a human-animal and what it was to an animal. Yet, as Erica Fudge asks, ‘why a cat?’ to which she immediately answers ‘a cat is much less easily tamed … rather than constructing the domestic sphere a cat might well be understood to challenge it’.[1] Mary Midgley draws the same conclusion suggesting that cats ‘are notoriously still not sociable or docile in quite the same way as dogs’.[2] Timothy Findley draws on this important aspect of the cat when recollecting his many cat companions; he suggests that each of his cats ‘had tremendous dignity – a kind of reluctant aloofness’.[3]‘

The idea of the cat as the philosophers animal finds its modern day counterpart on Twitter with #AcademicsWithCats. So why does this interest me so much? Well, at the moment I am looking at how the figure of the wolf has been constructed and what impact this has had on its relationship with humans. The relationship between wolves, the wilderness and werewolves ties in with the growing field of ecoGothic. How nature has been constructed in Gothic narratives is something which I find compelling – especially in relation to the animal as Other. My brief look at black cats, and cats more widely, has made me wonder whether this might not be my next area of research post-PhD. With this in mind, I would love any suggestions for texts that might be useful. So feel free to comment below.

As for my kittens. Well, they are small and black with a penchant for catching flies. They are called Freddy and Jason. Yes, that Freddy and Jason. We didn’t name them. Instead, I allowed a modicum of superstition into my life by deciding it was Fate sending us a sign that we simply had to adopt two tiny terrors. 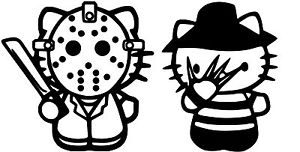 5 Responses to Who’s Afraid of the Big, Black Cat?