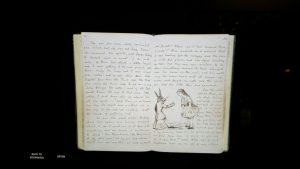 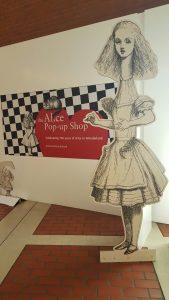 Over the Christmas period I celebrated my unbirthday by going to the Alice in Wonderland Exhibition at the British Library (one of the best free exhibitions to be found in London ever). It really was very special looking at Lewis Carroll’s original notebook complete with  hand-drawn illustrations (presented to the British museum in 1948). Carroll enthusiastically engaged with maths, photography and Pre-raphaelitism but it is Alice’s story that unites all these elements to glorious and bewildering effect. ‘Alice’s Adventures Underground’, inspired by Carroll’s friendship with Alice Liddell, was sent to Macmillan in 1863 and the rest is history, but there is still a lot to learn about the book and this is what the exhibition teaches.

I was amused to discover that he originally named the story ‘Alice in Elfland’ in his diary in 1862. Tenniel was brought in to illustrate the printed book but looking at the manuscript edition most of the visualizing of the characters had already been done by Carroll himself (something that I had not realised). There are stunning drawings of Alice, the Cheshire Cat, The Queen of Hearts etc. in the notebook. Tenniel I now know, only perfected what Carroll had already drawn and imagined (though he did give the Mad Hatter a top hat). As an illustrator Tenniel started to assert his independence in Through the Looking Glass (1872). He cheekily turned down the opportunity to illustrate some of the minor characters which were eventually cut from the book. We will never know the wonders of the ‘wasp in a wig’ for example because of this! He mistakenly thought his talent would be demeaned by such delights.

Another noteworthy discovery was the fact that Carroll struck up a friendship with Christina Rossetti. The influence of Alice on ‘Goblin Market’ now seems plausible and Carroll’s illustrations in turn are shaped by Pre-raphaelite sensibilities (this is evident in the notebook). 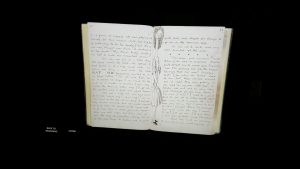 As I studied the exhibits I marveled at Carroll’s imagination again and again. I chuckled at the pool of tears section in the notebook when Alice opens out like a telescope and thinks she will never see her feet again. She imagines being kind to them and sending presents addressed to

I love the insubordination in Alice’s adventures too, particularly in the court scene:

Off with her head! The Queen shouted at the top of her voice. Nobody moved. ‘Who cares for you?’ said Alice (she had grown to her full size by this time). ‘You’re nothing but a pack of cards!’

Alice’s retorts, her questioning of adult authority and her subversive vision of the world are the perfect antidote to didactic works in which children are under the influence of powerful educators and mentors. Alice is no paragon, but her condemnation by the adults she encounters only serves to subvert the notion of original sin (that children are somehow born sinning and must be subject to rigid discipline or corporeal punishment to return them to a state of native innocence).

There are some striking adaptations and among the Wonderlandiana is a series of lithographs by Salvadore Dali (1969) and illustrations by Mervyn Peake which are understandably dark having been produced after WWII. Films abound from 1903 onwards. I completed my Alice adventure with a listen to Jeffersen Airplane’s ‘White Rabbit’ from their ‘Surrealistic Pillow’ album before visiting the Alice shop and picking up some wonderland goodies. My unbirthday will definitely be Alice themed next year!

What a wonderful dream it has been! Do adventure at the BL yourself if you can (on until April).