The Franck Crucifix: A Case of Family Folklore

Posted on 9th November 2017 by firekrank

Last week, I was up (across?) in Worcestershire helping my parents move into their new home. Alongside the mammoth amount of unpacking, there was a chance to wander around the local community. Like many British towns, we found our fair share of wonderful haunted and Gothic places from the ancient abbey on a hill to the Spirit House, a witchcraft shop plagued by a poltergeist. But in this post, I want to concentrate on a more personal story. 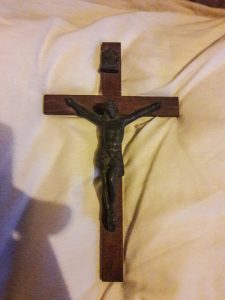 As we were unpacking we came across this crucifix, an object we’d inherited from my father’s house. None of my family are religious, however, this crucifix has a very special story. On discovering it amongst the boxes my mum asked me whether I knew its story. I dutifully parroted that this was the crucifix that had jumped off the wall, landing face down a metre away from the wall on which it hung, whilst my dad and his sisters were using a Ouija board. And this is why I have always been told by my dad, my 6’3″, leather-clad, motorbike-riding, power-tool-using dad, that I must never do a Ouija board. This story has been told to my sister and me multiple times throughout the years. It has become folklore within our family. And as far as I am aware, neither my sister or I have ever used a Ouija board.

Crucifix aside, there is another darker element to this little story which I find far more sinister. During one session with the Ouija board, my dad’s sisters asked the board for the name of a local murderer. A young woman, Leslie Whittle, has been kidnapped and her body had been found some time later in a drainage shaft of a local reservoir. The Ouija board offered a name, Donald Neilson, a local thief who was known by the moniker the Black Panther due to the black balaclava he wore. Having been given this name, it was placed in a sealed envelope on the mantelpiece only to be opened once the police had convicted someone of the murder. A few months later, a man was accused and found guilty of the crime. The envelope was opened and the names matched. Of course, the envelope could have been tampered with but, built into this sliver of folklore, there are multiple reasons for why this can’t be the case according to my dad. Again, I’ve still never used a Ouija board. It doesn’t matter how much I tell myself that it’s circumstantial evidence, high spirits of teenagers, I just can’t stop the shiver running through me whenever I think about this story.

Last Thursday, I tweeted a picture of this crucifix as family folklore. Family Folklore is recognised as a branch of folklore – understandably since folklore and its transmission over time connects to ideas of identity, social cohesion, and being one of the folk, whether that is within your immediate family or your larger community. As we move from one place to another we carry our family folklore like a talisman but we also become embedded into the stories and tales of our new community. Retelling our personal folklore strengthens it. One day my sister or I will inherit this crucifix and tell the story to our children. And who knows, maybe they’ll never use a Ouija board either.

1 Response to The Franck Crucifix: A Case of Family Folklore