I am increasingly intrigued by ‘folk horror’ and it was one of the sections in the British Library’s Terror and Wonder: The Gothic Imagination exhibition  that I spent longest pondering over. The BFI’s recent article is a must read therefore, a useful and lively intro to the folk horror genre. Apparently the label ‘folk horror’ first came to prominence in 2010 when Mark Gatiss used it as an umbrella term to describe a number of films in his A History of Horror documentary for BBC4. Since then, the term has grown to incorporate a huge variety of culture (silent Scandinavian cinema, public information films and the music of Ghost Box records, the writings of M.R. James, Susan Cooper and Arthur Machen).

The brilliant ‘Where to Begin with Folk Horror’ – defines this folkloric genre in relation to (mostly British) landscape as ‘the evil under the soil, the terror in the backwoods of a forgotten lane, and the ghosts that haunt stones and patches of dark, lonely water; a sub-genre that is growing with both newer examples summoned almost yearly’. The most striking of these new folk horrors for me is Robert Eggers’  The Witch (2015). Regulars to the blog will know of my uber obsession with Black Phillip! 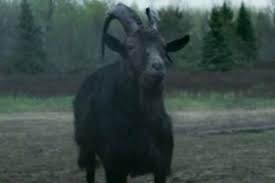 Folk horror has developed its own set of ideologies and a reverence for a trilogy of British countercultural films that represent the threshold between 60s hippydom and hedonism and the grim 1970s (that ended in Thatcherism). The trilogy, now often known as the ‘Unholy Trinity’, consists of Michael Reeves’ Witchfinder General (1968), Piers Haggard’s The Blood on Satan’s Claw (1970) and Robin Hardy’s The Wicker Man (1973). Their imagery has come to define  Merrie England’s gothic ‘other’ – ‘olde’, ‘wyrd” local Britain (it is no coincidence that Gatiss, who popularised the term ‘folk gothic’, was one of the writers for the creepy League of Gentleman set in the ‘local’ fictional town of Royston Vasey). Let us know if you have any good ‘folk horror’ sources or would like to suggest ‘folk horror’ novels or films…don’t leave home without your pitchfork…

Naked ambition and stone circles in The Wicker Man (1973) 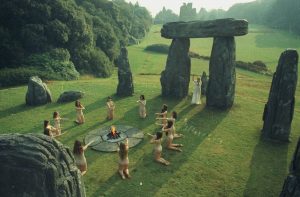 Associate Professor of Research, School of Humanities, University of Hertfordshire Co-convenor OGOM Project
View all posts by Sam George →
This entry was posted in Critical thoughts, Reviews and tagged BFI, Folk Horror, The Wicker Man, The Witch. Bookmark the permalink.

4 Responses to Folk Horror for Beginners