Aiken Drum and the Scottish Brownie

The last time I was in Glasgow I came across this rather spooky painting of Aiken Drum or ‘the Brownie of Blednoch’ by E.A. Hornel (1889) in the Kelvin Grove Gallery and Museum 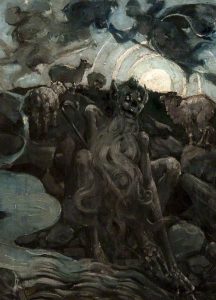 The image is inspired by a poem in Scottish dialect by William Nicholson (1782-1849). The intriguing folkloric ballad appears in the third edition of his posthumous Poetical Works in 1887.  Aiken Drum is a devilish creature who inspires great fear in humans and animals:

Rob’s lingle brak as he men’t the flail,

At the sight o’ Aiken-drum.

In the painting he is a gloomy phantom or Brownie but the name also has historical links. There is a rhyme by James Hogg which appeared in Jacobite Reliques in 1820 which also mentions the character Aiken Drum. In fact it is a Jacobite song about the Battle of Sheriffmuir (1715) and not a story about a phantom at all:

Sir Walter Scott also refers to this mysterious figure in his novel The Antiquary (1816) in a story told by an old beggar. I think this may be a case of history becoming myth and myth becoming history. I have been pondering what links this historical person with the popular Scottish song  ‘Aiken Drum’ and what links the song with the poem about the brownie and the painting?  I find this very curious indeed. The song (which you will probably know) is quoted in full in Iona and Peter Opie’s Oxford Dictionary of Nursery Rhymes as follows:

In the nursery rhyme Aiken Drum wears entirely edible clothes and Brownies are usually associated with food. They often make themselves responsible for the farm or house in which they live by doing chores that have been left undone by servants or by herding sheep (see painting) or collecting eggs. A brownie will often become personally attached to a member of the household and in return he has a right to a bowl of cream or best milk or to an especially good cake or cheese! Brownie’s are often given clothing in exchange for their work but money or reward is thought to drive them away. William Henderson’s Folklore of the Northern Counties describes the little treats left for brownies as ‘knuckled cakes made of meal warm from the mill, toasted over the embers and spread with honey’ (cited in Katherine Briggs, A Dictionary of Fairies p. 45).  This association with food and clothing does seem to link the Aiken Drum of the song with the Scottish Brownie and there are some descriptions in Briggs of the Brownie as looking monstrous, having no nose or an enormous mouth and webbed fingers or claws. It is this monstrous Brownie that is shown in the painting and described in the poem by Nicholson:

Cries Kate, “there’s a hole where a nose should hae been;

And the mouth’s like a gash which a horn had ri’en;

I’d love to hear any thoughts on this version….dino nuggets!? 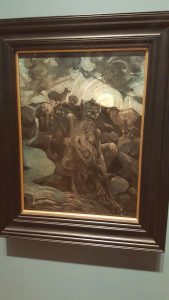 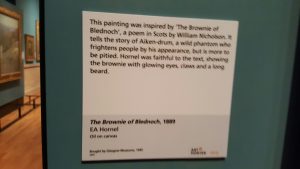