Marcus Sedgwick has been linked to OGOM since its beginnings in 2010. He has appeared at all 3 conferences and has generously offered up essays for both of the OGOM edited collections. His latest essay is intriguingly called ‘Wolves and Lies’ and it will feature in our forthcoming Company of Wolves book   I have fond memories of the session on feral or wolf children at the conference where I was lucky enough to share a slot with Marcus.  October sees the launch of yet another novel from this most gifted of writers and I wanted to post about this ahead of the Generation Dead: YA Fiction and the Gothic module (which runs from next week). 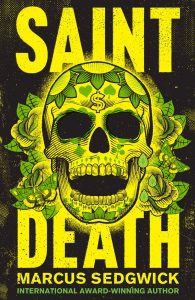 Marcus’s latest novel Saint Death is inspired by the mysterious figure of Santa Muerte (Holy or Saint Death), a ‘folk saint’ of growing popularity in Mexico and parts of the US. Santa Muerte is a (female) skeleton in a shroud, often depicted holding a scythe in one hand and the world in the other. She is something of a cross between the grim reaper and a female saint or holy virgin. Marcus has posted this fascinating video from youtube on his blog as an introduction to the figure:

By coincidence The IGA conference is in Mexico this year and one of the themes is folklore so there has never been a better time to read Saint Death! You can read an extract in The Guardian here and peruse the IGA conference and CFP using the link above.

1 Response to Saint Death: 2017 The Year of Mexican Gothic