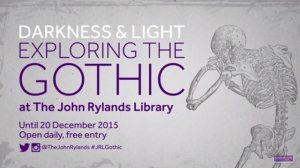 The John Rylands Library is pretty special for me being from Manchester. It is probably the most striking building in the entire city, delightfully imposing in its neo-Gothic splendour and housing some of the most rare and beautiful books ever produced (some of which I have been lucky enough to examine during the course of my own research). Yesterday it opened its new exhibition: Darkness and Light: Exploring the Gothic

Darkness and Light reveals how Gothic architecture and anatomy inspired and influenced a literary genre, and how the lasting legacy of Gothic can be found in art, films and subculture today.

From the fantastical to the macabre, this intriguing exhibition unearths Gothic treasures from the Library’s Special Collections to investigate subjects as varied as the role of women in the Gothic movement, advances in medical science and classic literature.

The exhibition also showcases artwork by students from the University of Salford and a gallery of photographic portraits of ‘Goths’, celebrating diversity and inviting visitors to explore what Gothic means to them.

If you are visiting Manchester University’s jewel in the crown or attending the gothic screening of Nosferatu in its historic reading room you might like to read up on vampires in our book from the Manchester University Press Gothic list:Open Graves, Open Minds: Representations of Vampires and the Undead from the Enlightenment to the Present Day.

Senior Lecturer in Literature, University of Hertfordshire
View all posts by Sam George →
This entry was posted in Events and tagged Gothic, Vampires. Bookmark the permalink.